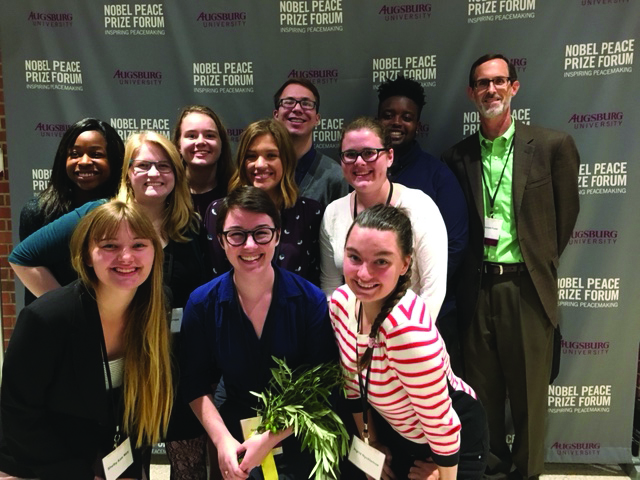 On Sept. 15 and 16, 11 Concordia students attended the 29th Nobel Peace Prize Forum at Augsburg University in Minneapolis. Among them were this year’s Peace Scholars, Grace Hoffa and Katie Beedy, and last year’s Peace Scholar, Andie Palagi. The students were joined by Dr. Ken Foster, associate professor of political science and director of the global studies program.

Each year, the Nobel Peace Prize Forum brings world leaders and Nobel laureates together with students and members of the community for a series of lectures and breakout sessions centered on a common theme. This year’s theme was “Dialogue in Divided Societies,” and the honored laureates were the Tunisian National Dialogue Quartet, who were awarded the Nobel Peace Prize in 2015 for their work in establishing democracy in Tunisia in the wake of the Jasmine Revolution. Other speakers included Representative Keith Ellison, former Congresswoman Gabrielle Giffords, and Olav Njølstad, director of the Norwegian Nobel Institute.

Concordia College has participated in the Nobel Peace Prize Forum since its inception. The Forum’s location used to alternate between five colleges with Norwegian heritage: Augsburg University, Augustana University, Concordia College, St. Olaf College, and Luther College. Concordia hosted the event every five years, but recently it was decided that the event would be held at Augsburg every year. Dr. Per Anderson, associate dean for global learning and the Nobel Peace Prize Forum coordinator for Concordia, decided to send students this year to see how the Forum had changed.

“The last two years they did it in a different way, more business-friendly and less student-friendly, and so we haven’t really participated in the last couple of years,” Foster said. “This year they redid it with some of our input, and so [Anderson] wanted to see … how we could send students down as a pilot to see if it was worthwhile.”

As Peace Scholars, Beedy and Hoffa spent seven weeks in Norway this summer studying peace, conflict resolution, and dialogue. Along with Foster, they had the opportunity to represent Concordia as delegates at high-evel dialogue sessions two days before the Forum officially began.

“The three of us were in a dialogue session about the red-blue divide, so the divide between Republicans and Democrats in the United States, so we learned how to facilitate discussions and how to have good, trusting relationships with people who are very polarized,” Hoffa said.

The nine other Concordia students who attended the Forum this year were part of either the global studies major or the social activism minor. Students in these programs were invited to apply due to the connections between their coursework and the mission of the Nobel Peace Prize Forum. The invitation was also limited to these programs in order to keep the group of students at a manageable number.

“One of the reasons we didn’t open it up to all of campus is because there was a very short timeline and then we didn’t want to make it too big of a deal or too much work for everyone when we’re just trying to see how this new reformed conference will be,” Foster said.

Students were selected based off their applications. Junior Brenna McEntee was one of the nine students chosen to attend the Forum.

“I thoroughly enjoyed learning how as a meager individual I could be a force of peace,” McEntee said. “I also enjoyed hearing from esteemed speakers including the Tunisian Dialogue Quartet, Dr. Elijah Anderson, Harry Boyte, Gabrielle Giffords, and Mark Kelly. These speakers spoke on a wide range of topics, from enhancing dialogue between all political parties to creating a welcoming ‘cosmopolitan canopy’ to preventing gun violence.”

After this year’s pilot program, Foster hopes to see deeper involvement and higher student attendance at the next Nobel Peace Prize Forum.