By: Andrew Swartchick
In: Art, Events, Featured, Music, Variety
Tagged: Christmas Concerts, concordia, for the beauty of the earth
With: 0 Comments 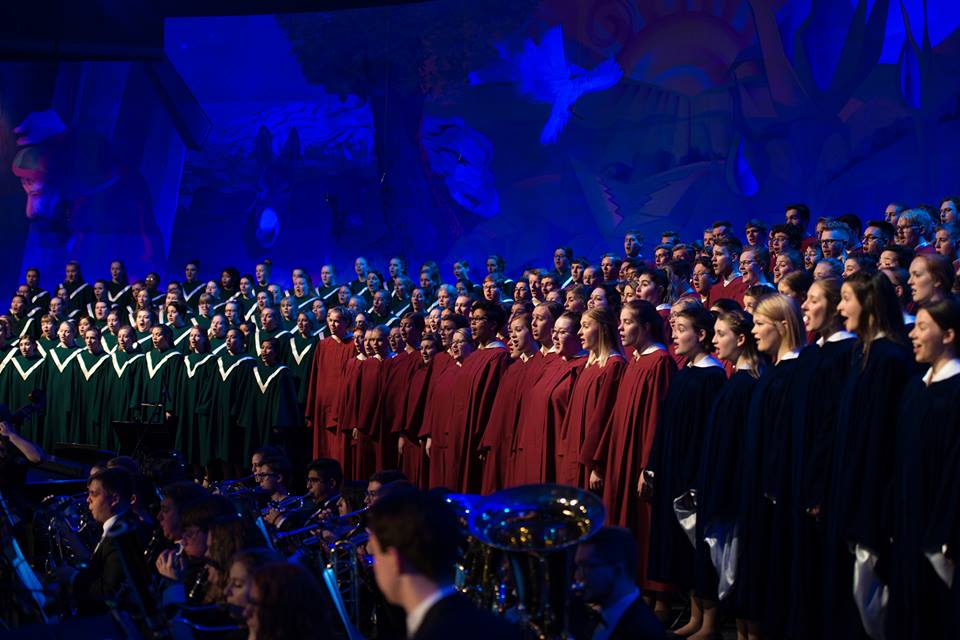 This year, the Concordia Christmas Concert took some considerable risks in music programming choices. Artistic risk-taking is a double edged sword that either pays off in full or falls flat, and the Christmas Concert this year had examples of these both. I would describe the  concert as an artistic collage that demands professional-level commitment from the performers, conductors, light technicians, sound technicians, and production staff. This collage includes many oft forgotten aspects that build up the idea of the holiday time and nativity story. For example, I believe that the Christmas Concert begins not at 2 or 7 pm, but forty-five minutes prior, when the Concordia handbell choir, Tintinnabula, begins playing in the concourse between Olson Forum and Memorial Auditorium (MA). The handbells greet audience members as they head to their seats, and they let you know that you are here for something special, and for something that is deserving of this premiere fanfare. This Christmas concert is more than just music, it is visual beauty and it is a story being told. Because this concert has been extremely successful since its humble beginnings in 1927, I had very high expectations for the new concert titled “For the Beauty of the Earth.”

For commentary purposes, I want to separate the first twenty-five minutes of “For the Beauty of the Earth” from the rest of the concert because I felt that these twenty-five were completely different in their presentation of the concert’s theme. This is also where the first risk and largest misstep lies in the program. This section should be applauded in its steadfast attention to the theme of earth, and for giving the audience new musical ventures as well as academically difficult repertoire. However, staying true to the theme he put forth, and being so bold in his trust of his audience is one of Dr. René Clausen’s risks. As an audience member, this was a challenging introduction to the themes of Christmas and of celebrating God’s creation on Earth. I felt the call to worship and praise dragged on instead of building expectation. An excess of similar musical style made this the case until the audience was welcomed to sing in “All Creatures of Our God and King.” Here, weaving in between the thematic material as well as the underlying story of advent and Christ’s birth, the Christmas concert finally found where it is at its best: an entire production with multi-faceted artistry and trading themes rather than simple music making.

Now, the choirs’ singing and the orchestra’s playing were absolutely gorgeous. Nothing, and I mean nothing, should be taken away from the performance these young professionals put forward. They all contributed to the overall glory of this show. Part of the nuance of great concerts is the joy that is spread from conductor to performer to audience members. There were several performers that held me in rapture with their ability to connect. Orchestra member Jade Teather, bass; Chapel Choir singer Brenna McEntee; and Cantabile singer Annie Weier are three that I want to point out as having had the purest, sweetest, and most captivating faces among the almost 400 performers. Joy is meaningful in all holiday spirits, and was carried by the choirs through many pieces. In the second half of the concert this joy manifested itself in what I believe to be the second thematic arc of the concert: that beauty in the earth is held within our humanity, through diversity, and the love that we share between our own communities.

I want to point out the highlights that filled had me and many other audience members swaying or even dancing in our seats. Pieces that played to the beauty within humanity. These include the outstanding and charming arrangement of “O Little Town of Bethlehem” by Dan Forrest, sung by the Concordia Chapel Choir, and featured Concordia senior Race Hoglund on the soprano saxophone; the playful yet mindful reminder of where our riches truly lie in “Where Riches is Everlastingly” by Bob Chilcott, sung by Kantorei; to the exuberant yet longing prayer in Ariel Ramirez’s “Gloria,” sung by the Concordia Choir in Spanish and featured a tremendous duet between two sophomore singers, Mallory Rabehl and Marin Wilts.

At this point in the concert another risky piece was programmed. “Joy to the World” by Concordia’s own Dr. Michael Culloton. Now, this may not be that big of a risk, but Culloton has quietly begun programming more of his own music for the choirs to sing in the Christmas concerts. The difference with “Joy to the World” is that this arrangement is lively and active and polyphonic in many instances, which is a huge leap from the simple and beautiful arrangements of hymns that Culloton has programmed in the past. This is one of the risks that played out very well for both the Chapel Choir, who sang the piece, and the Christmas concert as whole. Right before the finale, the audience needed a piece that would propel the concert forwards and “Joy to the World” was the perfect precursor.

The concert’s finale, “Psalm 150,” is a personal favorite of mine. I sang it in my first Christmas concert in 2014, and I was euphoric listening a piece that reminded me so much of my personal past. In this concert the song existed under the thematic umbrella of worldly beauty, and because of this it sent my mind to images of the future, images of splendor and hope in the young voices that were singing. It was the perfect ending to the theme. With this sense of finality from “Psalm 150” I originally questioned the validity of the programming of Egil Hovland’s “Stay With Us.” The piece is gorgeous, and the choir surrounding the audience sent chills down my back. However, the piece centers around the idea of Christ’s ascension into heaven. I was hard pressed to find a relationship between “Stay With Us” and the themes and feel of the concert until I thought more about why Christmas concerts are even performed in the first place. For many these concerts are a reminder of Christ and the only time that religion is brought into the forefront of thought throughout the year; so maybe there truly was a Christmas wish behind the final mass choir piece.

The Concordia Christmas Concert is one that brings audiences together for an experience that starts from the second they step onto campus until they leave after a night of auditory, visual, and emotive sensitivity. The 2018 Christmas Concert titled “For the Beauty of the Earth” took risks that I feel deserve commendation and praise. Without risk there is no evolution in art, and although some of the risks that were taken in programming missed the overall mark of this concert, nothing and no one can top the professional commitment and music making of the choirs at Concordia which will hopefully continue to bless audiences with ingenuity and cheer for years to come.