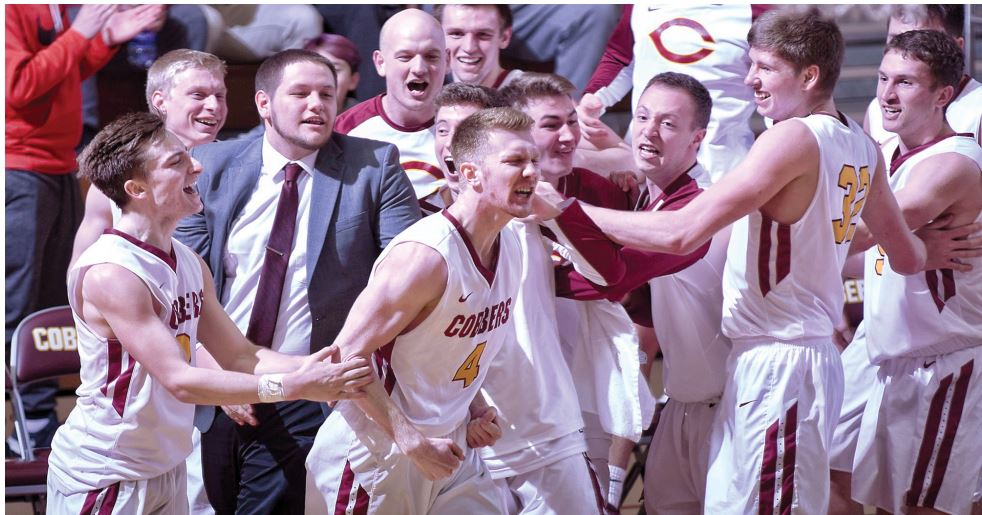 After starting the season slowly, the men’s basketball team has turned the page in the new year. Despite finishing 2018 with a measly 1-8 record, they have won six games so far in 2019.

“Since the calendar has turned to 2019 we have started to figure out how to win games and compete with some of the best teams in the MIAC,” assistant coach Sam Peters said.

The Cobbers have played close in games with St. John’s, Augsburg, Hamline, Gustavus, and St. Olaf — all teams that are battling with the Cobbers for playoff positions. With two games left in the MIAC regular season at the time of publication, Concordia holds a 7-16 record and sits two games behind Hamline for the sixth and final playoff spot.

Concordia made headlines two weeks ago when Collin Larson hit a game-winning half court shot as time expired to upset a very strong Augsburg team that currently ranks third in the MIAC. Larson finished the game with 24 points. Jordan Davis, a senior forward out of Dunseith, N.D., hit a big three-pointer in the last ten seconds to tie the game and put the Cobbers within striking position for Larson’s game-winner.

Larson has been a big reason the Cobbers have been competitive with the MIAC’s best teams over the past two months.

“The thing that I love about our team is that it’s someone different stepping up every night,” Larson said. “We have had so many different guys come up big for us in different situations throughout the season and I love that about us. It builds trust between the guys knowing that if something doesn’t go your way the next guy is going to step up for us.”

The Cobbers, a younger team led by second-year head coach Grant Hemmingsen, feature only seven total upperclassmen (four seniors and three juniors). As a result, the opportunities for younger players to step up and contribute have been numerous. One player who has seized these opportunities is Bryden Urie. Urie, a sophomore guard from Proctor, Minn., has started all 22 games for Concordia this season, averaging 11.3 points and 5.2 rebounds per game.

As the Cobbers enter the final stretch of the regular season they will be preparing for each game extensively.

“We have to understand that everything that we do matters,” Larson said. “From stretching to executing the scout, every single thing that we do is going to matter down the stretch. We talk about it everyday and we have all bought into that mindset.”

From the coaching staff’s point of view, keeping the right frame of mind and focus is of the utmost importance as the Cobbers enter the most important week of their season.

“We are staying focused on our goal of improving every day,” Peters said. “We need to continue to execute on both ends of the floor because as we’ve seen already this year, we will be in close games and we need to make sure we are prepared for those.”

Playoff appearance or not, this past month and a half of conference action has made for a memorable season. Most games have been competitive and the Cobbers have shown their mettle in matchups with teams that are much better than them on paper.

All but four of the Cobbers’ 14 games since the new year have been decided by 10 points or less, including a 70-69 heartbreak against St. John’s last Wednesday inside Memorial Auditorium. The Johnnies hit the game-winning three-pointer with 1.4 seconds left on the clock after the Cobbers looked to be in position for a season split despite losing by 39 to Saint John’s in January.

When asked what has been the best part of this season, Larson was focused on the task ahead.

Coach Peters also mentioned the bond between the group as a positive aspect of the program moving forward.

“The brotherhood that we have with our group has been special,” Peters said. “We have a great group that works hard every day and has bought in to our culture. We expect to compete every night and never beat ourselves.”

The Cobbers wrap up the season by going on the road to Carleton on Wednesday, Feb. 13. The result of that game, which will be available by the time this is published, will likely decide the Cobbers’ playoff fate. Concordia closes out the year with a home game against Gustavus on Saturday against Gustavus. The Gusties currently sit one game above the Cobbers in the MIAC standings.

If things fall their way, the Cobbers are primed to make their first MIAC playoff appearance after a two-year absence.

Larson expects the best from his team as they look to finish the year on a high note.

“We are a tough blue collar team with a ton of fight, so I expect that to continue.”