By: Wai Phyo Than
In: College, Sports, Winter
With: 0 Comments 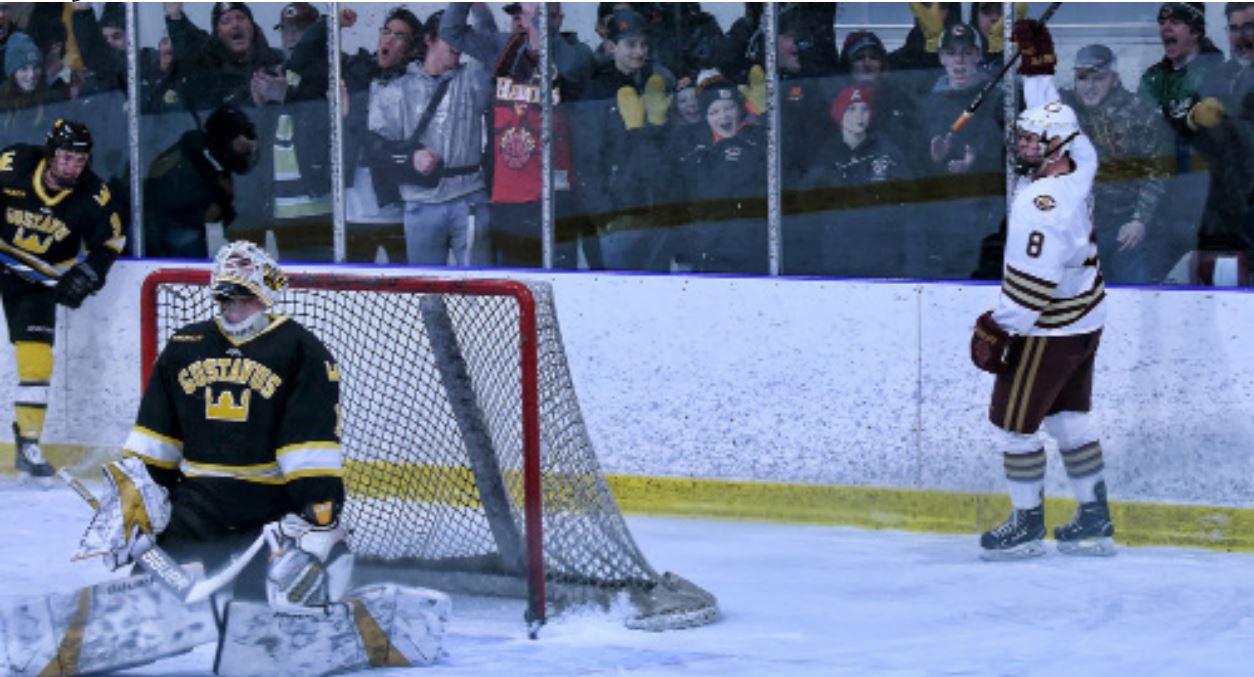 With two series remaining in the MIAC regular season heading into last weekend’s matchup with Gustavus, things were looking interesting for the Cobber men’s hockey team. Now, after a sweep of the Gusties with a pair of one-goal wins, it all comes down to the series that Concordia has had circled on the calendar for the entire season.

After finding itself mired in the MIAC’s midtable positions for the past decade, head coach Chris Howe and his team are two wins away from Concordia’s first MIAC regular season championship since 1987.

It won’t be easy for the Cobbers. Standing in their way are the Augsburg Auggies, the No. 6 team in the country. Augsburg sits four points ahead of Concordia with two games to go. The Auggies are looking to win their second regular season championship in the past four seasons.

“It makes things really interesting and entertaining,” Howe said. “On the flip side, it makes things really nerve wracking because you know how close everything is. We’re excited that we’re playing meaningful hockey at this time of year with the chance to compete for a championship.”

Concordia has 31 points and a 9-3-2 record through the first 14 games of the conference schedule, three more than third-place St. Thomas.

“It’s exciting,” Howe said. “With how the MIAC goes you could be playing for first one night and playing for fifth the next. It’s so close with really eight of the nine teams still in the mix. It’s going to be a great finish.”

The Cobbers need the full six points against the Auggies in Minneapolis this weekend to clinch the outright conference title. Concordia and Augsburg will each finish with 36 points if the Cobbers win both games and one of their wins comes in the second overtime period or the shootout.

The Auggies are 3-1-1 in their last five games, the lone loss a 3-1 defeat at Gustavus on Jan. 19. Concordia split the season series with Augsburg last season in Moorhead.

Whether or not the Cobbers end up winning the regular season crown, the Cobbers will host a MIAC playoff game on Saturday, Feb. 23 so long as they finish in one of the top two spots in the standings. If the season ended today, that would mean a Concordia vs. St. Thomas MIAC semifinal at the Moorhead Sports Center.

Concordia has not hosted a MIAC semifinal since 2001.

“There’s a lot of work to be done still, but it’s been fun for everyone involved,” Howe said.

WHAT TO WATCH FOR: Concordia vs. Augsburg Men’s Hockey

While the men’s team is battling Augsburg for a conference championship this weekend in the cities, the Cobber women will face off with the Auggies at the Moorhead Sports Center with a ninth straight playoff appearance on the line.

Concordia has 15 points in the MIAC with two games left, three more points than sixth-place Saint Mary’s. The Cobbers need two points to eliminate the Cardinals from playoff contention.

But before a stretch run under first-year head coach Maureen Greiner, the Cobber women headed to Europe for a truly hockey-inspired 10-day excursion.

Over winter break, the Cobbers headed to Europe for sightseeing, time off, and some friendlies with local European sides. Concordia went undefeated on the trip after wins over two different Swiss teams. After their time in Switzerland, the group headed to Italy to round out the trip.

“It’s just really good to get out with the team outside of hockey and do things that bring us together,” senior goalie Brittany Boss said. “The trip to Europe was really fun, and especially with different classes it really brings the older people together with the younger people and vice versa. You basically live with your class, so those outside activities really allow us to get to know each other better than just in the hockey setting.”

Coach Greiner particularly enjoyed the Italian portion of the trip.

“I loved Venice because it’s a city on the water,” Greiner said. “I also love the sound of the cars in the city, but what I love the most is that the girls were bonding together and getting to know each other. I have been all around Italy from Milan to Rome. It was a wonderful trip and the first time travelling overseas.”

With the playoffs looming, Greiner and the Cobbers are still focused on increasing the long-term success of the program.

“We want to be playing 60 minutes of good hockey and playing hard and aggressive during the game,” Greiner said. “Just giving everything we got and gaining more experience in the MIAC. We want to be a dominant team in the MIAC.”

The Cobbers can finish no higher than fifth in the MIAC, so they will be going on the road for a MIAC quarterfinal if they can clinch a playoff spot this weekend.

WHAT TO WATCH FOR: Concordia vs. Augsburg Women’s Hockey

2019-02-14
Previous Post: Freedom of speech grows more important throughout history
Next Post: Political discourse should be enjoyable and must be reformed