By: Emma Vogel
In: Music, Variety
With: 0 Comments 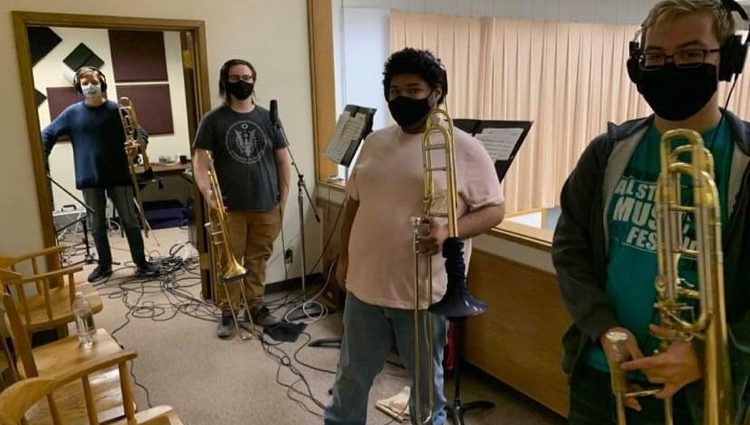 The sound of jazz music fills the room. Russell Peterson sits in front of a desk with two computers and a set of large speakers. He uses one hand to conduct and the other to follow along with a score, which is spread out on his desk.

Wires run from the computers into an adjacent room with foam squares on the walls. Leigh Wakefield, a Concordia music professor, sits on a folding chair in the middle of the room and plays the clarinet into a microphone. Through his headphones, Wakefield can hear the jazz music and the instructions Peterson is yelling.

This is the new normal for the Concordia Jazz Ensemble. They are using the recording studio to produce music this semester rather than giving concerts due to COVID-19.

Peterson, who runs the studio and directs the jazz band, is enjoying the opportunity to spend extra time recording.

“This is probably the best semester that I’ve ever taught jazz band in my life,” he said.

Normally, the jazz band doesn’t have time to record between rehearsing and preparing for concerts. Working in the studio is time-consuming because each section is recorded separately and then put together in a computer system, Peterson said.

On Mondays, the ensemble practices together, spread out in the Christiansen Recital Hall.

“We work the tunes together as a band, so when you come up (to the studio) you understand how things are going to sound,” Peterson said.

Tuesday and Thursday rehearsals are reserved for recording, where the sections come in and “lay down their part,” Peterson said.

First, the rhythm section is recorded. This includes the drums, bass, keyboard and guitars. The musicians wear headphones that play a click track giving the beat to ensure all the recordings line up.

Next Peterson records the saxophones, trumpets and trombones. Their recordings are stacked on top of the rhythm section, building the song piece by piece.

Finally, the soloist comes in. Their part is added last, Peterson said.

Next is the process of mixing, or editing, the music, Peterson said. He adjusts the volume of the instruments and adds artificial reverb to imitate the sound of a concert hall. There is even a tool that auto-tunes the musicians.

When Peterson began working at Concordia in 1997, the studio housed recording technology for the recital hall—a TV monitor with a cassette deck and a reel-to-reel machine.

“It was outdated in the 80s,” Peterson said.

Around the year 2000, the technology was removed. Peterson advocated to turn the space into a recording studio.

After getting approval, Peterson helped create the perfect room.

“Me and my buddies built these green things,” Peterson said. “They are called bass traps, and they absorb sound.”

Bass traps stop the sound from echoing off the walls, so musicians can record the driest sound possible.

“The whole point is to not let the room alter the sound you are hearing,” Peterson said.

Before this semester, the room was mainly used by the Concordia Beat, a club that produces a yearly CD, Peterson said. But this year, the studio is available to many more students.

Parker Haug is a senior studying music education, who plays saxophone in the jazz band. Haug said he enjoys working in the recording studio because of its real-life application.

“It’s one of the most realistic things that musicians will do,” Haug said. “You set it up, and you just go. There’s dudes in LA, that’s their job.”

The biggest challenge is getting everyone to play accurately, since you can hear every mistake on the recording, Haug said. The musicians will record a piece anywhere from one to 20 times to perfect it.

Jade Teather is a junior music education major who plays bass in the jazz band. She helps with the recording process by setting up microphones, adjusting sound levels and making edits.

“It’s a good gig,” Teather said. “I sit in the chair next to Russ and tell him when he forgets to do things.”

Teather is interested in learning about recording technology because she’s a singer and a songwriter, and she’s recorded many of her songs. Teather said she can see herself doing something with recording in the future.

Although the process of recording and editing can be time-consuming and tedious, she is glad for the attention to detail. They produce polished recordings, and the jazz band sounds better than ever before, Teather said.

Teather said she enjoys the one-on-one learning experience in the studio.

“The professors here are all so great,” Teather said. “Russ has been really cool about giving me chances to run things and learn in a real-life setting. Grateful for that.”