Community in a cup of coffee

By: Maria Klipfel
In: Campus, Community, News
With: 0 Comments 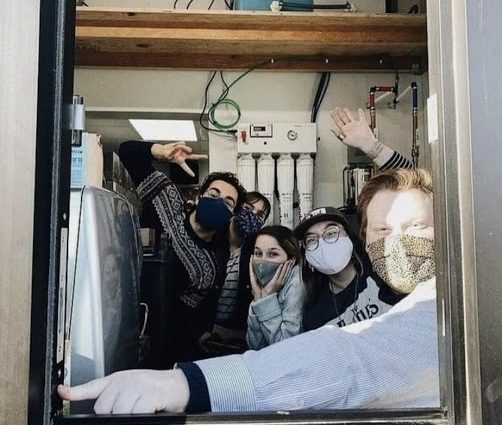 Like many great things, it all started in a basement. Ty Ford and Michael Moran decided to start their own coffee bean roasting company in 2014 and got to work. This became Twenty Below Coffee Company. After continued success at their Fargo location, Twenty Below expanded to a new location in Moorhead, which opened in December 2020.

Senior Skyler Klostriech has been working at Twenty Below since 2019, and is now working at the new location.

“If you are looking for a great cup of coffee or maybe some breakfast along with good conversation, Twenty Below is your spot,” Klostriech said.

The Moorhead location is new, but has already become a staple for Concordia students as the shop is within walking distance of campus.

First-year Nicole Fornshell said, “I hadn’t been there until I had the [Wellness Day] coupon, but now, I’m hooked. The coffee is great and I also just like the vibe of the place. It’s cool because it’s industrial, yet rustic.”

“Besides the aesthetic, because the aesthetic is so good, they do good things like support other local businesses as well. We really are focused on keeping things local. I think that is really special and a reason to support and stop by,” Klostriech said.

This company thrives on by supporting and focusing on the local community. One of the popular drinks on the menu is the Three Bears Miel, a honey and cinnamon latte that uses organic honey from the Moorhead-based Three Bears Honey Co. Even the artwork on the coffee cups features local artist, Sam Nielsen.

Supporting the community involves other businesses, but this also extends to Twenty Below’s customers. Junior Lance Morlock works at Twenty Below and reflects on his experience at both the Fargo and Moorhead location.

“Twenty Below started as just one shop about five years ago in the downtown area and I noticed that we had been getting a lot of NDSU students. The fact that they have opened a coffee shop so centralized is such an incredible experience. We truly now are drawing in all three schools and seeing those students come,” Morlock said. “It creates such a fun atmosphere, not only for workers but also for customers. I think it’s a great benefit to such a good coffee shop so close to campus with all three schools bridging that divide. It creates a really nice cohesive community space.”

“I think it gives people a place to congregate and create community,” Fornshell said.

Twenty Below has a bright future ahead of itself, backed by its customers and local partners.

“I would like to see them expand even more. I want them to keep succeeding and growing. I think it’s a really special place for a lot of people, not just for the workers but also our regulars and the community that we’ve built,” Klostriech said.

“Twenty Below has great products alongside its core values. Every day we are truly experimenting with new ideas and ways to make the business better, so as long as that continues and we keep on growing as a company and community, we can truly create incredible things,” Morlock said.

2021-02-18
Previous Post: The need for accountability in the GOP
Next Post: Embracing the Chill: Things to do in the F-M area this winter