By: Aya Al-Shakarchi
In: People, Sustainability
With: 0 Comments 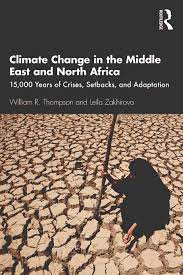 The Middle East and North Africa region is not new to the climate story, but it is known that the effects of climate change are often studied less in that region where the most devastation will occur in the future.

Leila Zakhirova, an associate professor of political science at Concordia College explores this possibility and is particularly attracted to the challenge of conducting long studies in a novel way by using uncommon methods in the field of social science.

Zakhirova published her latest research findings in her book “Climate Change in the Middle East and North Africa: 15,000 Years of Crises, Setbacks, and Adaptation” co-authored with professor of political science emeritus at Indiana University William R. Thompson. Zakhirova and Thompson were interested in exploring the correlation between the rise and collapse of ancient civilizations and climate change, particularly in the MENA region.

“We are able to correlate the fear of climate with the downfall of a civilization like ancient Mesopotamia, Greece and even the Roman Empire by going back because our research findings showed that it already happened nine times,” Zakhirova said.

With every research project, there must be a question. Zakhirova’s research is unlike any other Middle Eastern or climate studies research because it goes back as far as 15,000 years. This novel approach specifically assesses whether the timing of the changes in temperatures has coincided with the societal collapse of the region.

Zakhirova recognizes that climate change research is mostly entertained by scholars in the global North not because of the lack of trying, but because the global South has a lot on their plate.

“The urgency is overwhelmed by other pressing matters like poverty, wars and getting enough food in places like Syria and Yemen,” Zakhirova said. “You need to have met basic needs in order to think about abstract things like climate change and how to fix it.”

Nasratullah Elham, an international student from Afghanistan and a program intern for the sustainability office, shares the same sentiment.

As a student of politics, Elham believes that the water resource conflict stemming from the climate crisis will force a large community of people to suffer poverty, starvation and a lot of other issues addressed in Zakhirova’s books.

“In the MENA region, there’s a lot of people who still live off raising livestock and this is their primary source of income,” Elham said. “Droughts, desertification and lack of plantation caused by climate change will be extremely harmful for these societies.”

Zakhirova co-moderated Concordia’s first Politics Café this semester held by the department of political science that discusses if capitalism can survive climate change. The event was held on Oct. 14 where Zakhirova presented students with the Intergovernmental Panel on Climate Change climate reports and how they affected different parts of the world. The event’s purpose is to have an informal engagement between students and professors and discuss the affairs of the world.

“How flawed is the economic growth model?” Zakhirova started the panel discussion.

“I am a student of finance and we always talk about economic growth in a positive light. In the U.S., the end product of any capitalist endeavor should always equate economic growth, which is why we are in a situation where our generation will struggle with climate change consequences,” said Amina Fatkhulloeva, a senior who was the first one to respond in the panel.

Politics Cafés are open for students from all majors especially those not in humanities that do not get to discuss world affairs as much.

“As a non-political science professor, I loved the topic and the fact that I could express myself comfortably with professors,” biology student Faith James said.

Zakhirova’s research also ties up to her career as a full-time professor in teaching her courses such as Global Sustainability Issues and Global Political Islam.

“Whenever I finish any project, it helps me a lot in my own courses because as the question starts to emerge, I can share it with my students which helps in shaping the next research question for my projects,” Zakhirova said.

Zakhirova’s 2018 book “Racing to the Top: How Energy Fuels System Leadership in World Politics” uses similar social science methods that can examine history to be able to extrapolate into the future.

2021-10-21
Previous Post: Comparing national dropout rates to Concordia’s
Next Post: Preview: “Into the Woods” and its whimsical advice