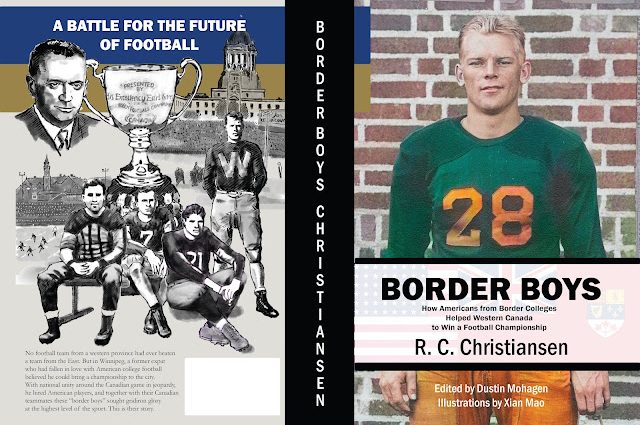 It was 1935, and the Winnipeg ‘Pegs had just won the Grey Cup. “Bob Fritz for Mayor! Bob Fritz for Mayor!” chanted the people of Winnipeg, Manitoba.  Led by head coach, quarterback, running back and Concordia College alumni Robert “Bob” Fritz, they were the first Western Conference team to win the Grey Cup, and, in fact, the first Western team to beat an Eastern team in any Canadian football league game up until that point.

Ryan Christiansen, North Dakota State University lecturer and Moorhead High School graduate, later wrote “Border Boys” about the people who inspired the chant.  This book is about how these American football players went to Canada to help the Western Canadian teams take down the Eastern powerhouses.

Fritz went to Concordia from 1931 to 1935 and played four years of varsity football at Concordia after not having played at all in high school. He was born and raised in International Falls, MN, where he went to high school and played basketball with Minnesota Gopher legend Bronco Nagurski. Christiansen said Fritz was a sort of quarterback-halfback hybrid, where he would throw and run the ball interchangeably with the other players in the backfield.

In 1933 and 1934, while Fritz attended Concordia, the varsity team would play Canadian football teams, including Winnipeg, since the Canadian teams were lacking competition. Concordia won both competitions, and the Winnipeg team took notice of the star fullback for the Cobbers. Fritz was recruited to come play for Winnipeg after he graduated  in 1935. A short but full career followed, lasting until 1937.

Fritz was a player-coach for Winnipeg in his first season in 1935, and Christiansen said he excelled at both. Fritz gave the quarterbacking duties to Art Stevenson, while he focused more on coaching and being the main runningback. Christiansen noted he was by far the best athlete in any game he played in, along with being the smartest player on the field.

During the season, the teams in the West wrapped up their season about a month before the teams in the East, and so Winnipeg would go to Detroit to train while they waited for the playoffs. While they were there, they attended a Detroit Lions game where they faced off against the Brooklyn Dodgers. During the game, Detroit ran a trick play where they would pump fake to a receiver, hand off to the running back who would throw to the player they originally faked it to and that player went for a touchdown. Fritz took note of this and came up with two variations of this play. Winnipeg ran both in the championship game and scored on both plays.

Christiansen said Fritz also had a reputation of a tough guy. In 1932, while playing for Concordia, he broke his right hand, which was thought to be his dominant hand. He did not tell anyone and was able to keep playing his same position because he was ambidextrous; he just started throwing with his left hand. The next season, he broke his jaw in the penultimate game of the year, finished that game and played the rest of the season. In 1935, he sprained his wrist before the Grey Cup and played with it. If not for that level of grit, who knows what the outcome of the 1935 Grey Cup would have been.

Fritz, known for his football talent, brains and brawn, was a Concordia legend who Christiansen said changed the landscape of Canadian football by giving the long dominated Western teams a chance to make a name for themselves.