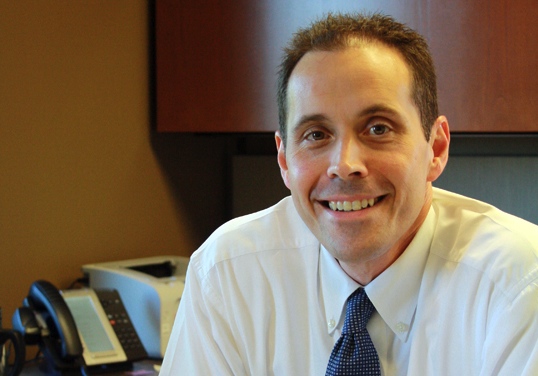 Steve Schuetz, hired last July as Concordia’s vice president of Enrollment, first came to campus with no intention to stay for long.

After a friend who worked at a search firm called him and suggested he apply for the opening here, he drove to the Twin Cities to meet the hiring committee on a whim. At the time, Schuetz held a position in the admissions office at Ripon College in Ripon, WI.

“I said, ‘I’ll go talk to the folks,’” Schuetz said. “What harm is there in talking to people?”

After good conversation with the committee and President William Craft, Schuetz was invited to visit campus.

“I was completely myself in the interviews,” Schuetz said. “I thought I’d probably never hear from them,” he said with a big laugh, characteristic of the Wisconsin native.

He was wrong. The people he met while on campus, including the admissions team, faculty and staff, and several students, thought Schuetz was the best candidate for the position, and he was hired shortly after his time on campus. Schuetz knew, too, that Concordia was a good fit.

In his position, Schuetz communicates Enrollment goals in order to attract students. According to admissions representative Steve Schaefer, the vice president is the voice of the admissions office to the campus.

“Steve helps [campus] understand that everyone has a direct impact on the health and well-being of the college,” Schaefer said.

Consistency remains Schuetz’s number one goal for Concordia’s division of Enrollment. Despite this period of national economic turmoil, it is important to Schuetz that Concordia continues to attract high quality students at a steady rate.

Maintaining numbers during the current economic recession is a challenge across the country. In a 2011 poll taken by the College Board, 41 percent of students said they “much more strongly considered” attending a local, public university due to the economic downturn.

To combat this trend, Schuetz said that what Concordia has to offer students is unique, and the responsibility to present that to prospective students lies largely in the Enrollment division.

“Students have to see and understand the value of the education we offer, the relevance of the liberal arts,” he said.

Schuetz graduated with a Bachelor of Arts from the University of Wisconsin– Stevens Point and obtained a master’s degree in management from University of Maryland– University College. While he spent his own college years at regional, public institutions, he has worked for private liberal arts schools for his entire career.

Experience has taught him about what students need to learn during their college search, and it’s usually all about the people who make up a particular school.

Junior Chris Banken worked as a student ambassador in the admissions office during the summer and was able to meet Schuetz during his visit to campus.

“His personality showed through in the interview so much,” Banken said. “He seemed light-hearted and fun!”

During the hiring process, the summer ambassadors spent time with each candidate. Banken, a usually bubbly, energetic music major, decided to play the part of the “serious Cobber.” When Schuetz entered the room Banken immediately put on a straight face to ask why he hadn’t yet received his copy of Schuetz’s most recent résumé.

Schuetz handled Banken’s dry humor well, and that was enough for Banken to feel good about endorsing him as the top candidate choice.

“We had pretty limited say, but we felt he was the best,” Banken said.

To some at his previous institution, Schuetz’s decision to move his family to the border of Minnesota and North Dakota might have been seen as a risk. Co-workers jokingly asked him before he left it he thought he would be able to understand the Minnesotan accent.

With his wife, Heather, and four young children; Sophia, 8; Gabriell, 6; Avery, 4; and Ian, 1; Schuetz has been adjusting to life in Fargo-Moorhead, and he says the accent is no heavier than the Wisconsionites’. They like that it has a Midwestern feel and appreciate the diversity in Fargo cuisine. Spicy Pie, a hip, downtown pizzeria, has become a Schuetz family favorite.

Schuetz’s appetite for new things fits in well at Concordia. He is encouraged by the projects like the Offutt School of Business, due to be complete by the 2012-13 term, and the ever-expanding study abroad opportunities afforded to Concordia students. Both offer exciting benefits to incoming students, Schuetz said.

“[Concordia] has done a lot of the right things. This is an institution that likes to take risks,” he said. “There’s a big risk sitting in the ground just across the street. Other things like global curriculum recognize the changing landscape.