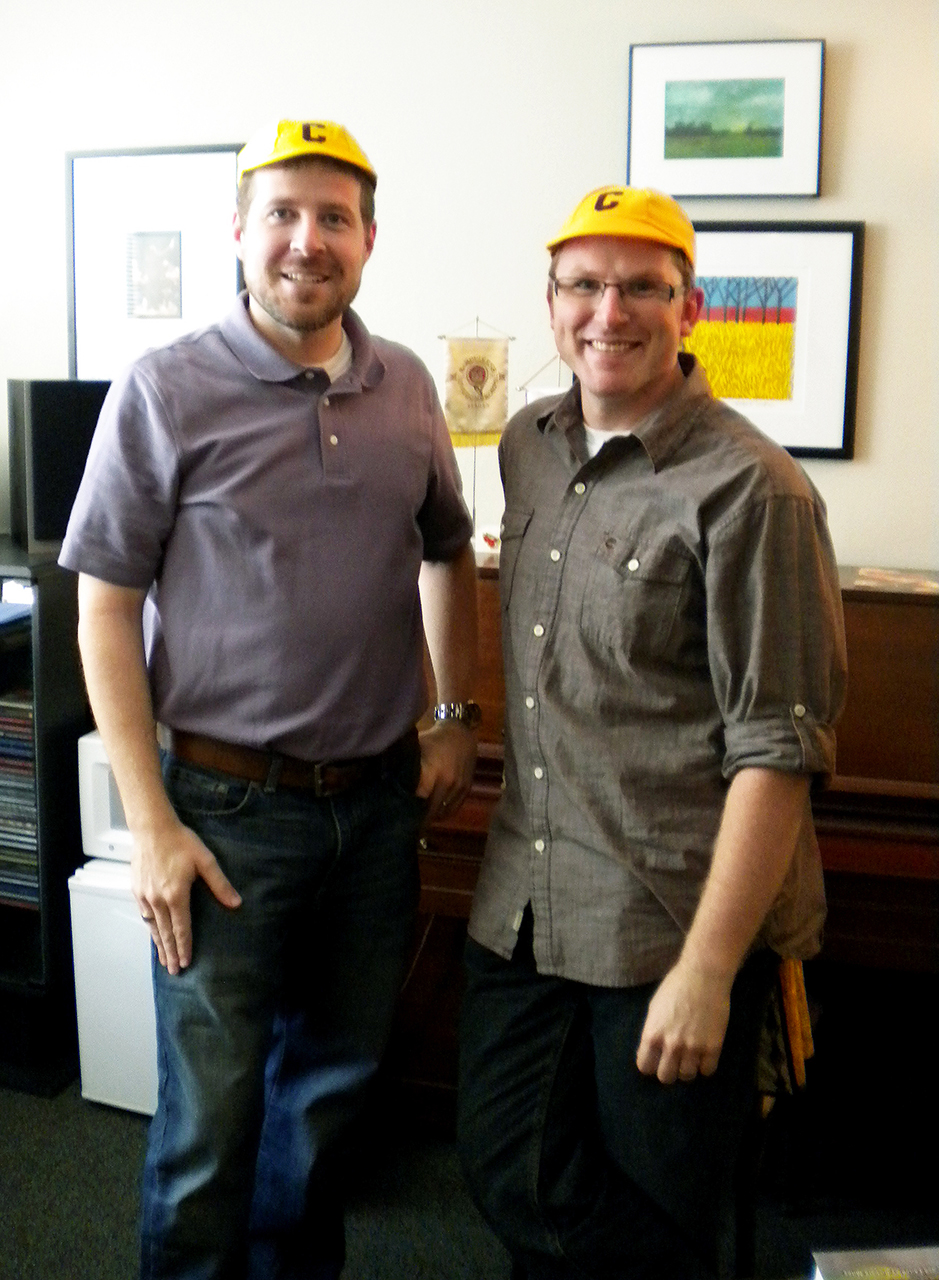 Call it a homecoming of sorts. Two people graduated college and left to pursue their careers in different places, and two separate job openings brought them back to the place where they started.

Peter Haberman and Michael Culloton graduated from Concordia College just one year apart from each other. Housed out of the same major, they both learned how to be music directors. They were in different ensembles at Concordia and they had no idea that, one day, they would be directing the ensembles. They have come back to Concordia, to the place where they first learned how to teach.

Although both ended up at the same place, their journeys were very different.

Haberman, after graduating in 1997, taught at a variety of schools before returning to Concordia. First, he taught at a school in Maple Lake, Minnesota. It was his first experience in a community where music professionals were needed.

“I was the music man for the whole community,” Haberman said. “I was the director of many community ensembles and the school band.”

After working there, Haberman decided to continue his education and start his self-proclaimed “academic gypsy” phase.

Culloton took different steps to make it back to his Alma Mater. He graduated from Concordia in 1998 and went on to further his studies in Arizona. He taught at Luther College, where he got a sense of the ELCA community once again.

He left Luther to teach at the school district in Winona, Minn. and then ended up in Rochester, Minn. where he served as the artistic director for the Choral Arts Ensemble and Honors Choirs of Southeast Minnesota for eight years.

“We weighed our options very carefully before we moved,” Culloton said. “I was teaching future choir educators and I was extremely happy with my job and working with the future of choir.”

However, that happiness did not take away Culloton’s yearning to teach on an ELCA campus again.

“When I taught at Luther, I got a sense that I would want to come back to the ELCA community,” Culloton said. “I wanted to come back whether that was at Luther, Concordia or another ELCA school.”

Although both Haberman and Culloton were settled into their jobs and had families, they each received a call that they saw as leading to new opportunities in a place that was very familiar.

Band Director Scott Jones and Michael Smith were leaving Concordia and needed replacements. For Haberman and Culloton, this was an opportunity they couldn’t turn down.

“Scott [Jones] called me and said that this was an opportunity and he really thought I should give it a try,” Haberman said. “You know what they all say: ‘Give it a try, what is the harm?’ They never prepare you for the real deal.”

Haberman applied for the job and got an interview with some of the music faculty at Concordia. They were his former teachers, friends and mentors.

“It didn’t really feel like an interview—more like a conversation,” Haberman said. “They were all people I knew and it felt weird because I, at times, forgot I was supposed to be having an interview.”

For Culloton, the interview process was much the same. When he learned that Smith’s position would be opening, he started to debate whether or not to apply. His opportunity to go back to the ELCA community was there.

“The interview committee was made of all my former teachers,” Culloton said. “That is really what brought me here. They impressed me and even the president of the College was there to show me around. That was great.”

Culloton knew he did not come to Concordia to be better than his predecessor. On the first day of school, during Chapel Choir, he stood in front of the ensemble and took a moment to soak it all in.

“Michael Smith was great, but I did not come here to be him,” Culloton said. “I brought my own shoes and I let the students know right away that I was here to be myself and not anyone else.”

He has Smith on speed dial if he ever needs help with anything, but he likes to do things his own way. He knows that members of Concordia choirs have a legacy, history and loyalty and he respects that.

Haberman thinks of it much the same way. Though there are still many faculty members that were at Concordia when he was a student, the music department looks much different today.

“Yes, Concordia is steeped so much in tradition,” Haberman said, “but there is such a refreshing amount of rethought and the faculty is able to move forward and adapt.”

He said that this year is about catching up and he is not only using the music faculty but also students as support. He wants to be a person who can bring forth the ideas that he has accumulated outside of Concordia and bring a new approach to the department.

Haberman also wants to engage students and make a difference in their lives through interactions and through music.

“I want to teach future teachers and let them learn how to do this,” Haberman said. “I want to make a lifelong community of music and make music an integral part of students’ lives. Most of all I want to make it so people in the community fight the Concordia bubble and come to campus to listen to music.”

Culloton hopes to add many things to the choir program this year. He wants to reach out to the ELCA churches in the community and have his choirs sing in select Sunday services. He wants music composition majors to have the chance to have their pieces read during choir practice. He also wants to continue to publish former student pieces in a choral series he started with his brother. According to him, it is much like “Oprah’s book club” for choral music.

Both Haberman and Culloton have enjoyed their homecoming. They were once students aspiring to be music teachers and now they are back to where they started. This time, however, they are giving directions instead of taking them.