By: Nina Due
In: Campus, Community, News
Tagged: Habitat for Humanity, playhouse project, playhouses
With: 0 Comments 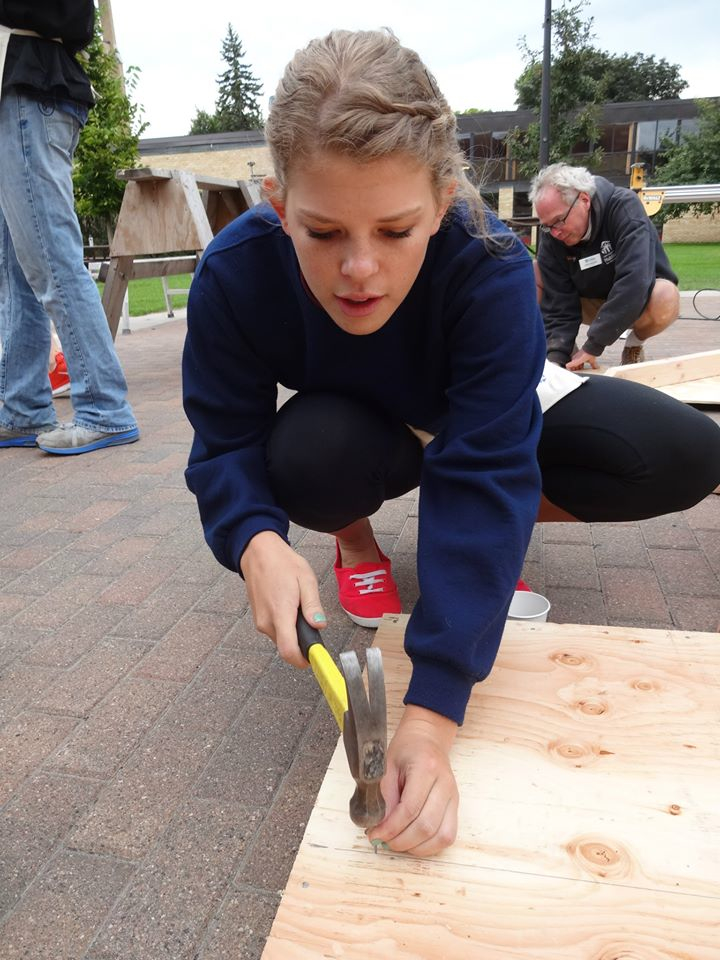 The sound of hammers and nails filled the air in front of Knutson Saturday morning when, despite the chilly air and threat of rain, approximately thirty students woke up early to make playhouses for Habitat for Humanity.

“I am most excited to see the campus organizations working together on this project,” said senior Brianna Johnson.

Campus Ministry Commission, Student Government Association, Habitat for Humanity, Better Together, the Theater and the Campus Sorority (Lambda Delta Sigma) were involved in the Playhouse Project.

There were coffee and some snacks set out for the students when they arrived and a little after nine, the work began.

Rob Rich, executive director of the Lake Agassiz Habitat for Humanity, kicked off the event with a little background on what would be happening to the playhouses after they were finished.

“The playhouses will be going up for sale at the ReStore in Moorhead. All of the proceeds will go to the Lake Agassiz Habitat for Humanity project to help fund affordable and decent houses in the area,” Rich said.

This is the second annual Playhouse Project that Concordia has done. Last year there were six houses, and this year the group is doing five. The group is currently co-chaired by Johnson and senior Jordan Elton.

“We had a huge success last year and it is good advertisement for the Habitat for Humanity group,” Johnson said.

Home Depot donated all the paint for this year’s project, Wal-Mart and SunMart donated the food and Starbucks donated the coffee, according to Dan Biebighauser, faculty advisor for Habitat for Humanity.

Since the playhouses will be sold at the ReStore in Moorhead, anyone can shop there and the money will be kept within the Lake Agassiz Habitat for Humanity program.

The project includes painting the playhouses once they are assembled. The pieces for the houses this year were pre-cut, sitting in five separate stacks for the groups to take from. This made the building process a lot faster than the year before.

However, unexpected rain caused the crew to finish assembling their houses and pack up before they could paint. The playhouses were hidden under plastic tarps and tents in an effort to keep them dry.

Since many of the major Habitat for Humanity trips take place over spring break, this is one way for the campus organization to raise awareness of their cause and get students excited about service work.

“Habitat has a project for everyone so there is always a way to get involved. Even if you have never hammered a nail before, it’s okay. The staff is here to help and guide the process along” Biebighauser said.

Nina Due, 2015, is a News Writer for The Concordian. Born in St. Cloud, Minnesota, she has declared an English Writing major with a Political Science minor.