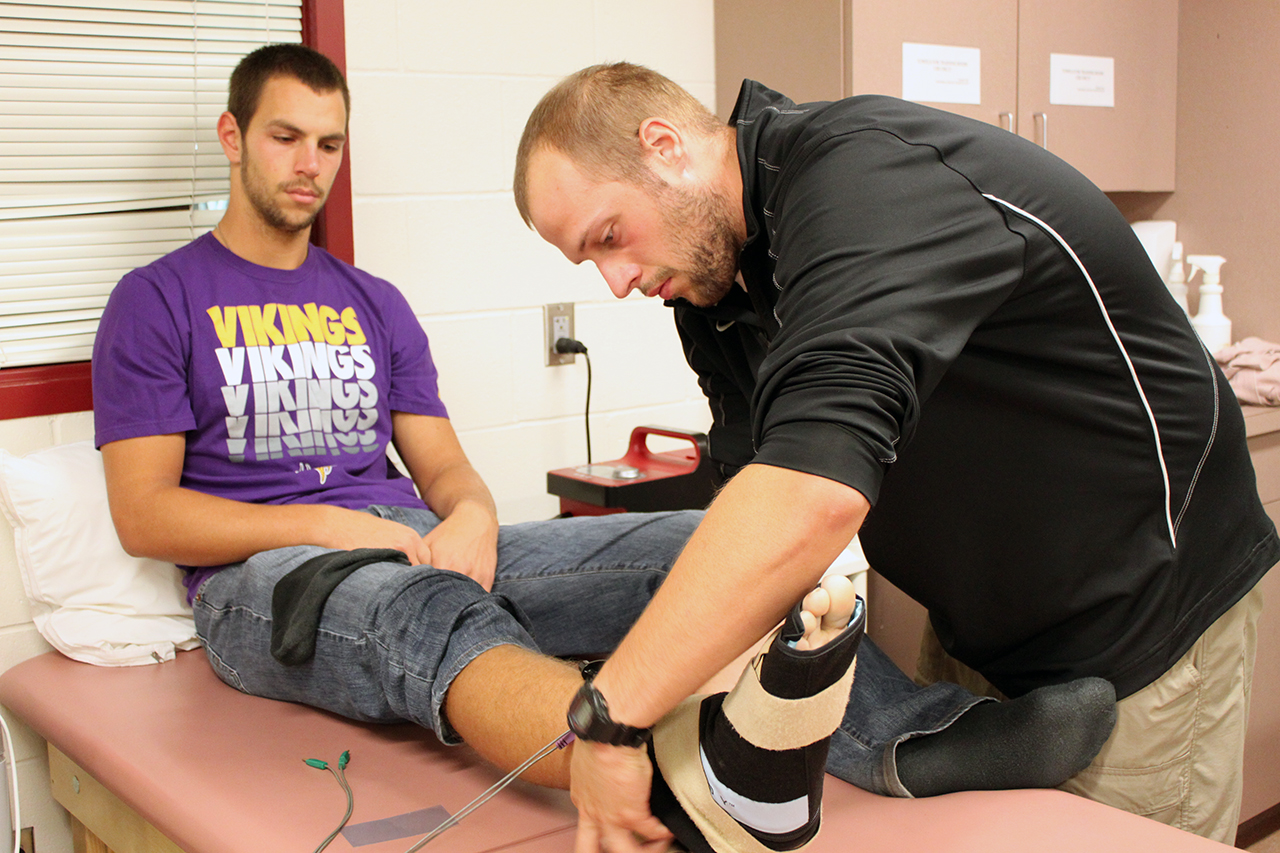 Injuries can occur in a split second. Yet the process of physical healing can take many more months.

On campus there are two full-time athletic trainers, one assistant athletic trainer and two graduate student assistants taking care of the injured Cobber athletes. The athletic trainers on campus treat injuries like bruises, concussions, sprains and broken bones. The trainers refer athletes to a Sanford physician when their injury is beyond minor to make sure nothing is seriously wrong.

Athletic Trainer Don Bruenjes said different injuries are more common in different sports. For cross-country overuse is a common cause of injury. Soccer sees many knee and ankle injuries, football sees collision injuries, and shoulder injuries are common in volleyball.

The trainers assist in identifying the injury, rehabilitation after the injury and communicating with athletes, coaches and parents. At least one athletic trainer is present at every sporting event. Trainers travel with the football team because of the number of players and the frequency of injuries.

Freshman cross-country runner Tyler Pederson was injured at the end of June. He developed tendonitis in his Achilles tendon due to overtraining. He has been unable to compete this season and has been forced to motivate himself since he has not been able to train with the team.

Volleyball coach Tim Mosser has two injured athletes on his team, one with back spasms and one with a concussion. These players are not competing right now either. Mosser said that although dealing with injuries affect the set lineup, he tries to have a deep enough team so they can still perform at their highest level.

Mosser also has a depth chart of his players so in case of injury he and his assistant Bob Jones can make a quick, effective decision. Mosser and his team focus on being their best in every situation. He points out that injuries give another player the opportunity to have playing time and improve.

“One thing we always talk about is supporting our teammates,” Mosser said. This is why he has his injured players continue to attend practices even if they cannot participate physically with any of the drills.

When an injury first takes place, the trainers have to let the inflammatory response period pass. After that they try to find what the athlete can do and keep the athlete active. The focus is set on regaining strength and balance in order to get back to competition.

“We try to keep athletes competing as long as they can and as long as it’s safe, but we don’t want to have a situation that the injury is prolonged, “ Bruenjes said.

The trainers’ approach to recovery depends on the athlete. They have protocols they must follow when an injury occurs, but they modify it according to the athlete’s situation. For example they push seniors more than younger players because it is their last chance to compete.

“We try to make our care very individualistic to the needs of the athlete,” Bruenjes said.

Pederson has been on a cross-training schedule on elliptical and bike.

“I’ve definitely been able to feel my injury through cross training, but it’s something you just have to do to stay in shape,” Pederson says. He is focused on being able to compete as soon as possible.

Mosser makes sure that his athletes are not rushing the healing process. He wants them to start playing once they can go all out.

“We are always concerned about the well-being on the student athlete and that has to come number one,” Mosser said.

Injuries are not solely physical. There can be an emotional side to injuries too.

“If somebody goes through a serious injury, they go through the same steps of grief as somebody does with any major loss or death,” Bruenjes said. Bruenjes views part of his job as helping athletes realize that being able to compete does not define who they are as a person.

Mosser is on board with this concept. He says, “Every person is a precious person, period. No matter how you perform.” Mosser suggests that student athletes to turn to Acts 14:22 which reads, “We must endure many hardships to enter the kingdom of heaven.”

Peterson said, “Even though this was kind of a block in the road, I definitely know I will get over it, and it will make me a better runner and a better person.”