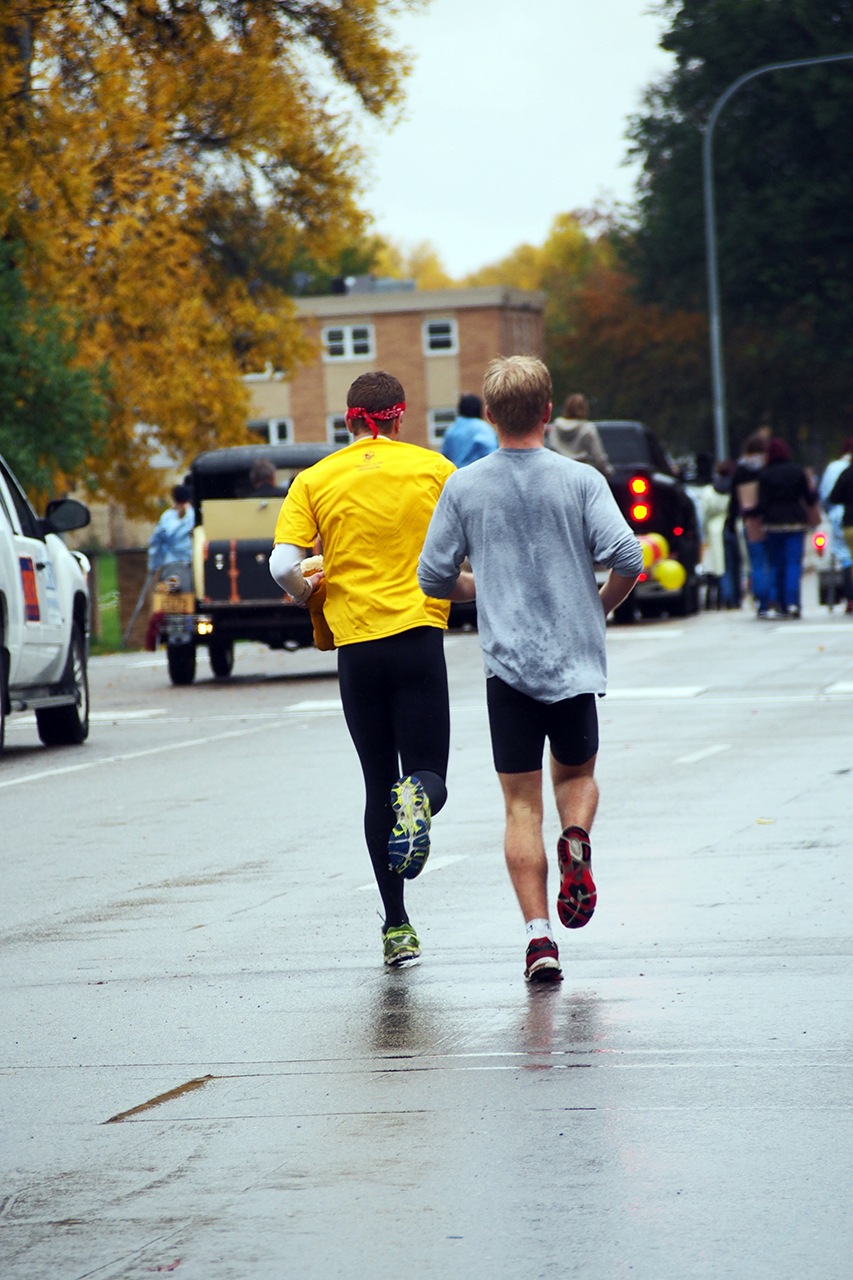 The Cobber men’s and women’s cross country teams are off to great starts this year. Both teams have competed in three meets: the Valley City Invite, MSU Moorhead Invite and the Griak Invitational. The men’s team finished second, fourth and 16th place respectively in those meets. The women finished first at Valley City, fifth at the Moorhead Invite and 18th at Griak.

The men’s cross country team is very young this year with 12 new freshmen. Head coach Garrick Larson said this was a great recruiting class, and many freshmen will have the chance to make an impact right away.

Among the few upperclassmen is Ryan Sederquist, a senior originally from Moorhead. Sederquist finished 35th out of 300 runners at the Griak Invitational Sept. 28 at the University of Minnesota. He also started off the year finishing second at the Valley City Invite. Sederquist, the leader of the men’s team, said he’s been training hard, running 90 to 100 miles some weeks. Sederquist said he is pleased with his start to the season and that the workload is much higher than past years.

One of Sederquist’s favorite aspects of this season has been getting to know the freshmen and the rest of the team.

“I really enjoy the camaraderie of the team,” he said.

One of those freshmen, Matthew Lillehaugen, has shown his strength this season and is now the number two runner on the team. Lillehaugen finished 68th at the Griak Invitational. He has made the transition to cross country in college by training hard throughout the summer.Lillehaugen said he runs 75 to 80 miles during some weeks. During long runs he thinks about keeping himself in check and not letting himself settle.

Other members who have contributed to the men’s team this season include Carl Wahlin, a freshman from Bismarck; Henry Dobbs, a junior from Moorhead; Ethan Spittle, a freshman from Worthington, Minn.; and freshman Cody Bekkerus from Pelican Rapids.

Larson said he looks forward to seeing this young team grow, believing the team has a lot of “upward swing.”

“The window is a lot bigger for these freshmen coming in,” Larson said.

The women’s team is highlighted by a strong senior class, and almost every runner in the top seven has dealt with some sort of injury.  Head coach Marv Roeske said those with injuries have been smart about recovering and getting healthier.

“Everyone is slowly making the comeback to full health,” he said.

Running number one for the women’s team is Morgan Christian, a senior from Moorhead. Christian missed the whole track season last year due to an injury, but she is rebounding well and getting better every race. Christian has posted some great finishes this season, including fourth place at Valley City, 11th at the MSU Moorhead Invite and 52nd at the Griak Invitational in St. Paul.

Sophomore Melissa Uhrich is having a tremendous season so far, holding the number two spot. Uhrich, who had a difficult freshman track season, discovered this summer that her iron levels were low. After a doctor’s appointment in June, it was evident her legs were not getting enough oxygen. Uhrich said this is a problem many female cross country runners deal with. Once she took iron supplements to get her levels up, she was able to return to form, now one of the young leaders of the women’s team.

Uhrich explained how while running she often thinks about things going on in her life or even just of a random song. During meets she said it is all about mental toughness and positive self-talk.

Hannah Knickerbocker, the number one runner last fall from Stanfield, Minn. is also coming back strong after missing out on last year’s track season because of an injury. Roeske believes that every day she is getting closer to where she was last year. Knickerbocker finished third on the team at Griak and 74th overall.

Paige Rygg, a senior from Fargo, suffered an injury this summer but is slowly coming back. Rygg opened up the year at Valley City with an overall finish of 18th and then finished fourth on the team at Griak.

Kathryn Stalnaker, a senior from Clara City, Minn. had a great junior season in cross country and track but suffered a fluke injury during the summer. After lots of cross-training, Stalnaker has been able to gradually overcome her injury.

Callie Christianson, a senior from Glenburn, N.D. has been a solid contributor for the team, finishing in the team’s top seven both at Valley City and Griak.

Freshman Kaya Baker from Grand Rapids, also a hockey player, has finished in the team’s top seven twice this season and is one of the team’s promising young runners.

Roeske said this was one of his better senior classes.

“They have been strong since the moment they walked on campus,” he said.

This article was written by Mark Melby, contributing writer.  Contact Mark at mmelby1@cord.edu.