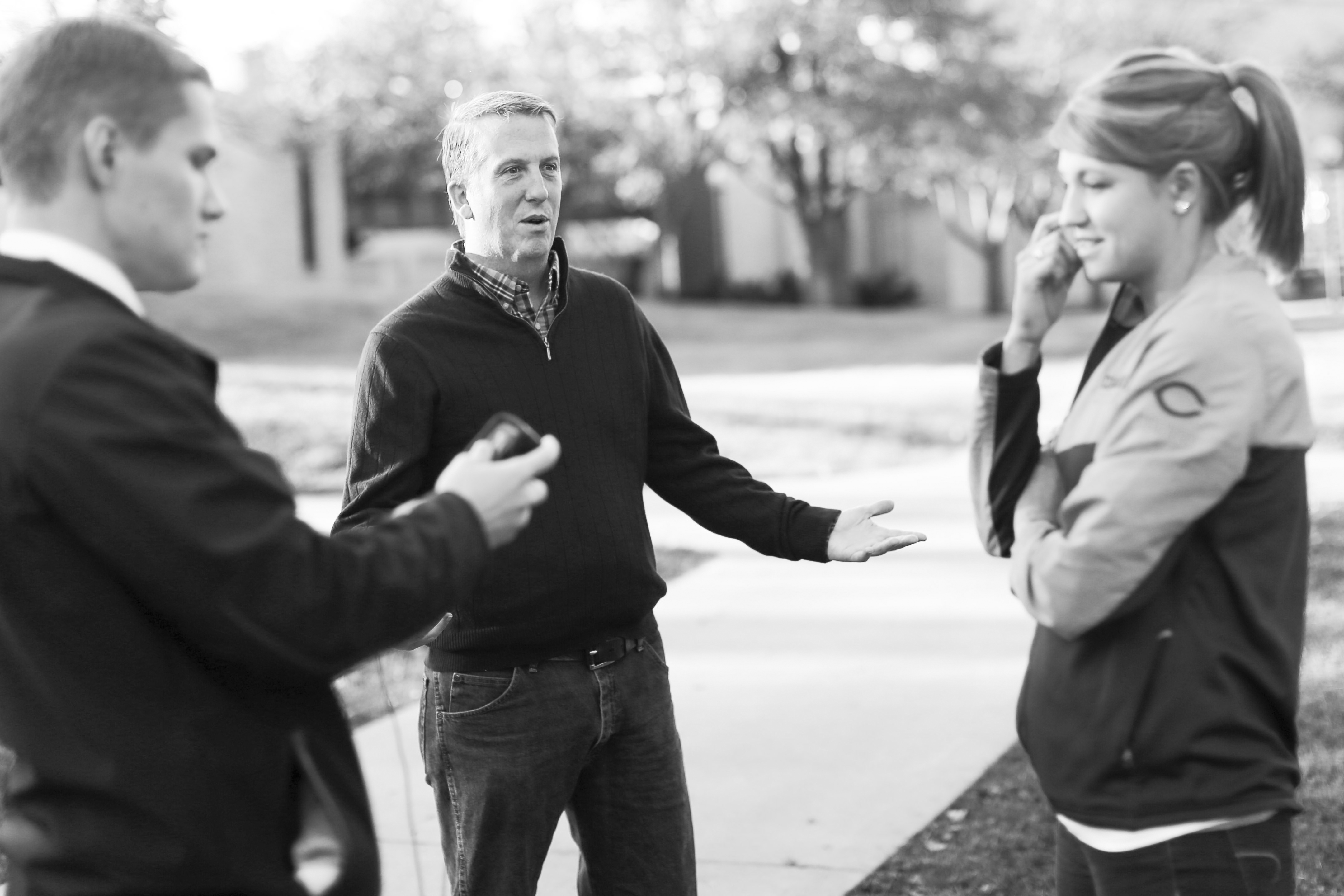 COBBS WIN! COBBS WIN! Everyone ac­tively involved in the Cobber athletic com­munity has seen this phrase on countless occasions on a variety of platforms: Twitter, Facebook and sometimes even Instagram. Up until that final victory tweet, the Cobber com­munity is receiving live stats from an online account, Cobber SID.

But who is Cobber SID? Who does the Cob­ber community have to thank for the constant updates and insight into Cobber athletics? The answer is Concordia’s Sports Information Di­rector, James Cella.

If one were to look up sports enthusiast in the dictionary, Cella’s name would be the defi­nition.

“I loved sports growing up, and I played all sports,” Cella said. “Hockey, baseball, bas­ketball, football, everything — I just loved all sports.”

Cella not only enjoyed playing the sports, but he also found a desire for another angle.

“I loved being on the other end of sports, with communications, writing, and listening to games,” Cella said. “That aspect of the game is what I wanted to go into after college.”

Cella did not always plan on being a sports information director. In fact, he graduated with a degree in English from Saint John’s back in 1985. He did not start working in English related fields upon graduation. After graduating, Cella was approached by the head Saint John’s soccer coach at the time who was in need of an assistant coach.

“Something I’ve always wanted to do was coach,” Cella said.

It was an offer he couldn’t refuse.

“I could always get into communications and go back into it, but as a coach you really can’t,” Cella said. “I didn’t want to be 40 and wish I would have gone into coaching.”

After his time as assistant soccer coach passed, Cella’s love for the another side of the athletic world took a presence.

He went back to school to obtain a commu­nication and broadcasting degree. Soon after, he found his way to Concordia, and 44 years later he is still here.

Cella’s coaching days didn’t end with the Johnnies. In fact, his days of sitting on the sideline picked up immensely once he became a Cobber. Going down the list, Cella has been the assistant hockey coach, assistant softball coach and head women’s soccer coach. At one point he served as an intramural director. Currently, he holds a different combination of positions: assistant men’s soccer coach and sports information director.

In both roles, Cella is able to share his en­thusiasm with a surrounding audience. With coaching, his love for the sport is expressed through teaching others how to appreciate and better understand the game. With sports information, he is able to share his passion through words and photographs to a wider audience than one could ever have imagined.

Cella is responsible for the media atten­tion of all 22 sports at Concordia. The collec­tion of items that he works on for the athletic department is a list longer than there is room to fit. Cella manages everything that goes onto the Cobber athletic website: pictures, stories, schedules, rosters, live statistics and videos.

Each individual sport has its own subpage where people can find everything they need to know about that specific team. There are sea­son previews, game previews, feature articles, recaps, boxscores, photographs, graphics and even sometimes video excerpts. Cella provides media items to the public so that people can be up to date on all the latest that is going on in Cobber country.

“It’s been unbelievable,” Cella said. “It’s probably the biggest change of any job at the college athletic level — sports information. You’re going from reporting statistics and do­ing programs to being a complete media cen­ter.”

Other coaches and faculty involved in ath­letics notice Cella’s hard work and attention to detail.

“He is on the cutting edge of all social me­dia — always coming up with new ideas and helping our program stand out,” said head vol­leyball coach Tim Mosser. “We are in the sea of four to five hundred schools at the Division III level and he is doing what helps us stand out.”

While the media evolves and people enter the world of social media, people want instant updates.

“With social media increasing, so has the demand. Everybody now is on twitter. Every­body’s on Facebook. Everybody’s on Insta­gram,” Cella said. “They all want every sport all the time, so instead of covering the sport that day and going away, people want 24/7 coverage.”

Being a one-man-show, providing constant coverage for 22 sports does bring its trials and tribulations of having enough time to promote each sport, which in turn, are the hardest part of the job.

“At this time of the year basketball is start­ing up,” Cella said. “I wish I could get more coverage of the teams and they want it because the last couple months they’ve seen everything that has been posted about every other sport and then all of the sudden they start and they are like wait a minute where is our stuff.”

“That’s the toughest part,” Cella added. “Not being able to get coverage to every sport all the time the way I want to.”

The job has its late nights and early morn­ings for Cella, but his passion for sports keeps him going.

“Is there an oxymoron word to describe it? Like jumbo shrimp,” Cella said with a laugh. “Like happily stressful. It’s happily stressful because it is lots of stress but you are doing what you love.”

Cella said he calculated the days he worked last year, from the beginning of football sea­son in early August to the end of May when track season wrapped up. There were 282 days in that period of time. He worked 278 of those 282 days.

“Most of the time it’s like, ‘oh this is great’ come into the office and there is an event going on,” Cella said. “For me that is great because I don’t think I could be in a cubicle all day.”

While he may be simply sharing a love for a variety of sports, coworkers see his work as a lot more than that.

“He has done such a great job getting our teams recognized,” Mosser said. He has coached before. He knows what it’s like to be a coach and he can really relate and under­stands the ups and downs and the trials.”

“My hat is off to him,” Mosser continued. “He is just an awesome guy.”