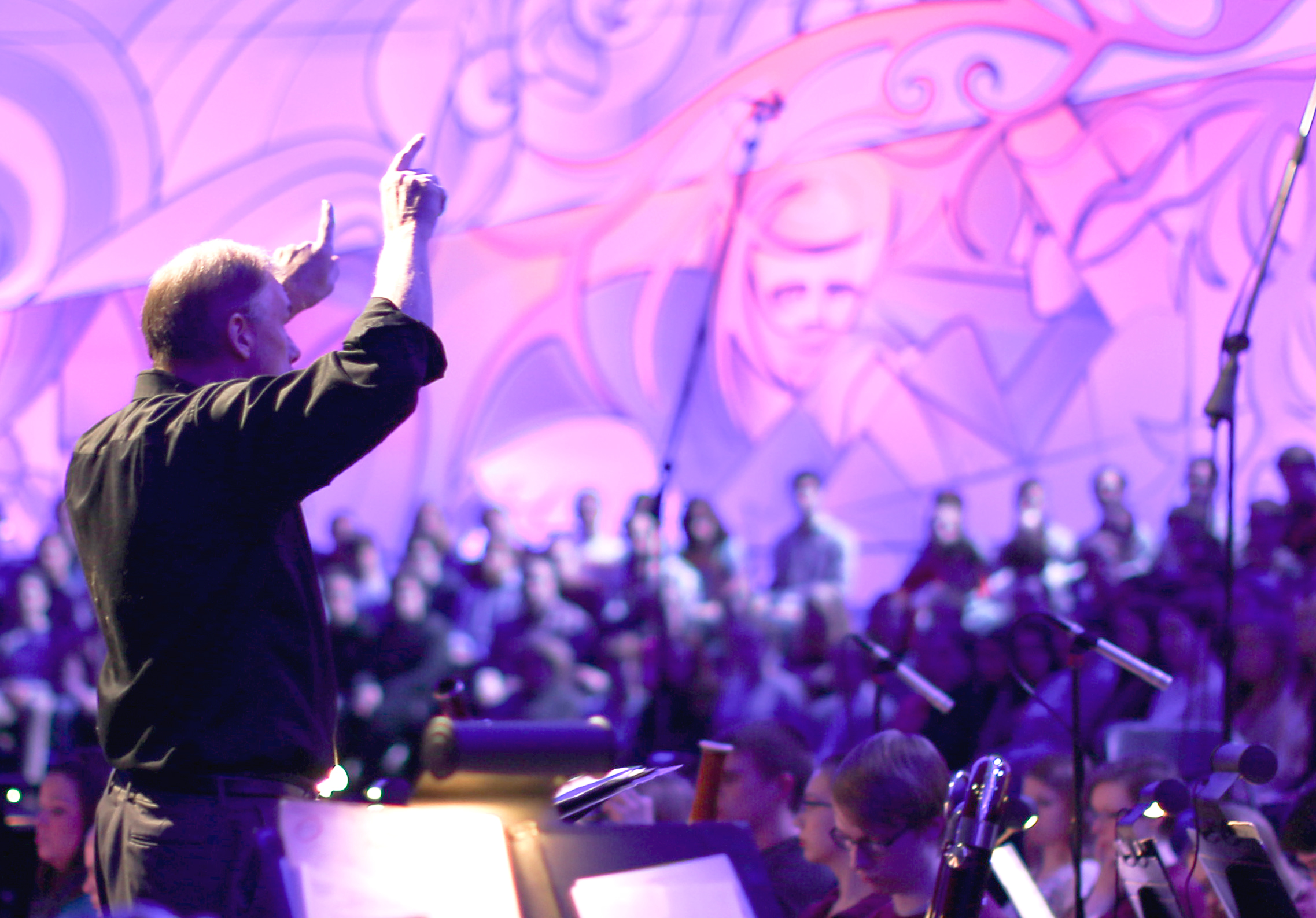 Dr. René Clausen, fresh out his year-long sabbatical, will be premiering several compositions at this year’s Concordia Christmas Concert.

One premiere will be performed by the Concordia Orchestra as a prelude. An old German carol, “Fantasia on In Dulci Jubilo,” was the basis of the piece.

“A lot of people will know [“In Dulci Jubilo”], but I’ve split it up in different ways … within the orchestra,” said Dr. René Clausen, conductor of the Concordia Choir and a professor of choral conducting.

The original Latin title of “Fantasia on In Dulci Jubilo” means “Good Christian Friends, Rejoice,” but Clausen has put his own spin on the piece that ends with a surprise, according to Foster Beyers, conductor of the Concordia orchestra.

“[‘Fantasia on In Dulci Jubilo’] is … an arrangement of the tune which starts very soft and mysterious, and builds into a very joyous dance. It ends with a big surprise, but people will, especially if they know Dr. Clausen, recognize it right away … and think, ‘Did he really just put that in there?” Beyers said.

The prelude speaks to the larger theme that Clausen has worked to develop within the pieces he has chosen for the concert.

“This year, I was really interested in the theme of joy and singing,” Clausen said.

This joy may be a part of the Christmas season, but it may also be related to Clausen’s return from sabbatical.

“[On sabbatical] I spent a lot of time writing and exploring. I do a lot of composition, and so I listened to a lot of different types of music. I [was able to] study and learn and reflect and just absorb, especially in some different areas of composition that I have not delved into before,” Clausen said. “It was a good experience.”

But, according to Clausen, being on sabbatical was also very different from the busy life of being a conductor at Concordia, especially after three decades of conducting at Concordia.

“I’m used to seeing my kids every day at 4:30 and waving my arms, so that rhythm of the day was totally different,” Clausen said. “I missed being with my choir on a daily basis.”

The music departments as well as the campus missed him while he was on sabbatical. Without Clausen, last year’s Christmas concert was not the same, according to Beyers.

“It was different, of course. He had a sabbatical replacement, Mike Smith, who is wonderful, just a different person,” Beyers said. “Every different conductor brings their own priorities, and their own sound, so it was inevitable that it would sound different.”

Despite the differences, many of Clausen’s arrangements were incorporated, and the concert was still remarkable.

“Oh my gosh, I love [the Christmas concerts]. They’re one of the best parts of the year. It’s just an unreal experience being on stage with all those people and making that quality of music,” said Wyatt Steinke, junior who has been in choir since he started at Concordia.

Steinke has been a part of the Concordia choir with both Smith and now Clausen conducting, and he notes that the experience is very different, as each of them go for different things in terms of what they are listening for and the way that they work.

“I love both of them so much. It’s so amazing to get … to work with the both of them,” Steinke said. “But, [with Clausen,] it feels like being in a whole new choir. Every day it pops into your head how lucky you are to be working with him, so it has been great to have that this year.”

Clausen is known both nationally and internationally for his compositions and arrangements, within and beyond Concordia’s Christmas concerts.

“He puts so much into his music; there’s just something about his music that you don’t hear in a lot of composers. He knows what he is doing so well, and is such a master at his craft,” Steinke said. “I haven’t heard René Clausen pieces that I don’t like. It’s just something about him and about his music that just speaks to people. I think it flows right from his soul and his heart, and I think that that’s how he really connects with people.”

It is not too late to experience this musical connection. Tickets for this year’s Christmas concerts are still available.

“He [has] a distinct style which I think is a real advantage for us in the Christmas concert, because, when people come to our Christmas concert, it has a certain sound, which is consistent from year to year, and I don’t think that any other school really has that sort of consistency,” Beyers said.

According to Clausen, his style is what a composer would call Neoromantic expression, in terms of the harmony, tone color, rhythm and dynamics that he uses. Clausen hopes that his style has grown and improved with time.

“Hopefully it’s not too predictable from piece to piece,” Clausen said.

There is a difference between predictability and consistency, and Clausen is able to make the new familiar, and the familiar new.

“He writes harmonies with a lot of notes closely stacked, one on top of the other, and it creates a beautiful shimmer,” Beyers said. “He writes a lot of sustained things for the strings, then he has winds playing lyrical solos over the top. His modulations — which is moving from one key to another — are always very dramatic and will give you the chills.”

Steinke agrees that there is just something “Clausenesque” about many of Clausen’s arrangements and compositions, especially “O Nata Lux,” which the Concordia choir is singing this year.

“The harmonies are so gorgeous and pristine, and just the way the whole song flows. It’s just one of those songs that, even if I didn’t know who composed it, I would think, ‘That has to be Dr. Clausen behind it,” Steinke said. “It’s just fits so well with his style and the sound that he wants from the choir. That’s one of the songs that I’m most looking forward to in the concert.”

According to Steinke, with “O Nata Lux,” there are a lot of nineth chords that add a sparkle to the sound, which he attributes to Clausen’s overall style of flowing music with beautiful harmonies.

“As we are singing … and I’m watching him conduct, I feel like what he is doing is exactly what the song is telling, the way that his flowing gestures get us to create this song that just builds up into these big chords and big dynamics in a way that is just … so Dr. Clausen,” Steinke said. “I think he goes for very beautiful harmonies, beautiful sounds, and tries to create something that speaks to people.”

“[Clausen] always writes really well for the orchestra,” Beyers said. “He knows the instruments, and what sounds good on each instrument, and he’s able to write for the orchestra in a way that makes us sound good very quickly. He also writes good parts for everyone, which is also really important, especially for the prelude. That’s kind of our chance for the orchestra to shine, and he always makes sure that every section of the orchestra gets to play something meaningful.”

This understanding of orchestra and instrumental music in general stems from Clausen’s beginnings in music.

“I originally started on saxophone, and then went to several other instruments, including trumpet, flute, and piano. Then, as I grew older, I refined my primary interest into choral music and choral conducting,” Clausen said. “I still play, I still like to play instruments and I feel comfortable working with instruments, too.”

Clausen has written quite a few pieces for orchestra, both within the contexts of the Christmas concert and outside of it, according to Beyers.

“I really liked his ‘Psalm 150’ very much. We did that last year in the Christmas concert,” Beyers said. “[Clausen also] composed a piece for orchestra called ‘Affects,’ which we premiered two years ago.”

This year is the first time that the orchestra is premiering one of Clausen’s preludes for the Christmas concert. Even with all that he has written, according to Clausen, the hardest part of composing and arranging music is getting started.

“It is finding the text and getting in the water with that text. You have to be able to swim downstream with the text. If you’re not resonate with that text, it’s like swimming upstream; it’s hard work. It’s finding that text and then studying the text from its structure and its content. What is the author or poet trying to say?” Clausen said. “Then the goal is to amplify musically what the author or poet is trying to say with their poetry or literature.”

After that, there is a lot of decisions concerning individual themes and how the piece is going to be constructed, according to Clausen. Many of these decisions have to be made about the Christmas concert as well.

“We start working on that in the summer, actually. We kick around a number of different ideas,” Clausen said. “It’s more difficult that you might think in terms of a theme for a concert.”

Eventually, though, a theme is chosen, and it becomes the center around which the the rest of the concert is built.

“It has to have the right feel. It can’t just be a bunch of words, it really needs to have its own thematic identity and attraction and poetic feel,” Clausen said. “Normally, I look through a lot of different music, hymns, ideas, poetry.”

This year’s theme is joy and singing and celebration. The theme was inspired by an older hymn called “From East to West, From Shore to Shore,” according to Clausen. The second line of this hymn is “Let every heart awake and sing.”

“That theme really attracted me because of the number of very visceral words: heart, awake, sing. A lot of joyful expression in that text,” Clausen said. “And I thought that it was very poetically beautiful and would make a good theme for celebration.”

Beyond the theme, Clausen is always careful to create an opening section that is engaging for the audience and an ending section that builds toward a dynamic conclusion.

“Hopefully we never do music we don’t like, so we are doing a concert of music where we enjoy every piece,” Clausen said. “But it always closes with what we call the Compline or the final prayer at the end, which is very quiet and is always sung by the Concordia choir and the strings. It’s a tradition that we do every year. I think for the choir…and for me as well, [the Compline] is a very important blessing at the end of the concert.”

For the choir, though, the Compline is not the only blessing. Clausen himself is priceless to the program and the students whose lives he changes.

“Every day, it’s just one of those things that it pops into your head how lucky you are to work with somebody like this,” Steinke said. “Every day I just think that these are moments I am going to remember my whole life, working with him, and I’m learning so much every minute in front of him. It’s making such a huge impact on my life.”