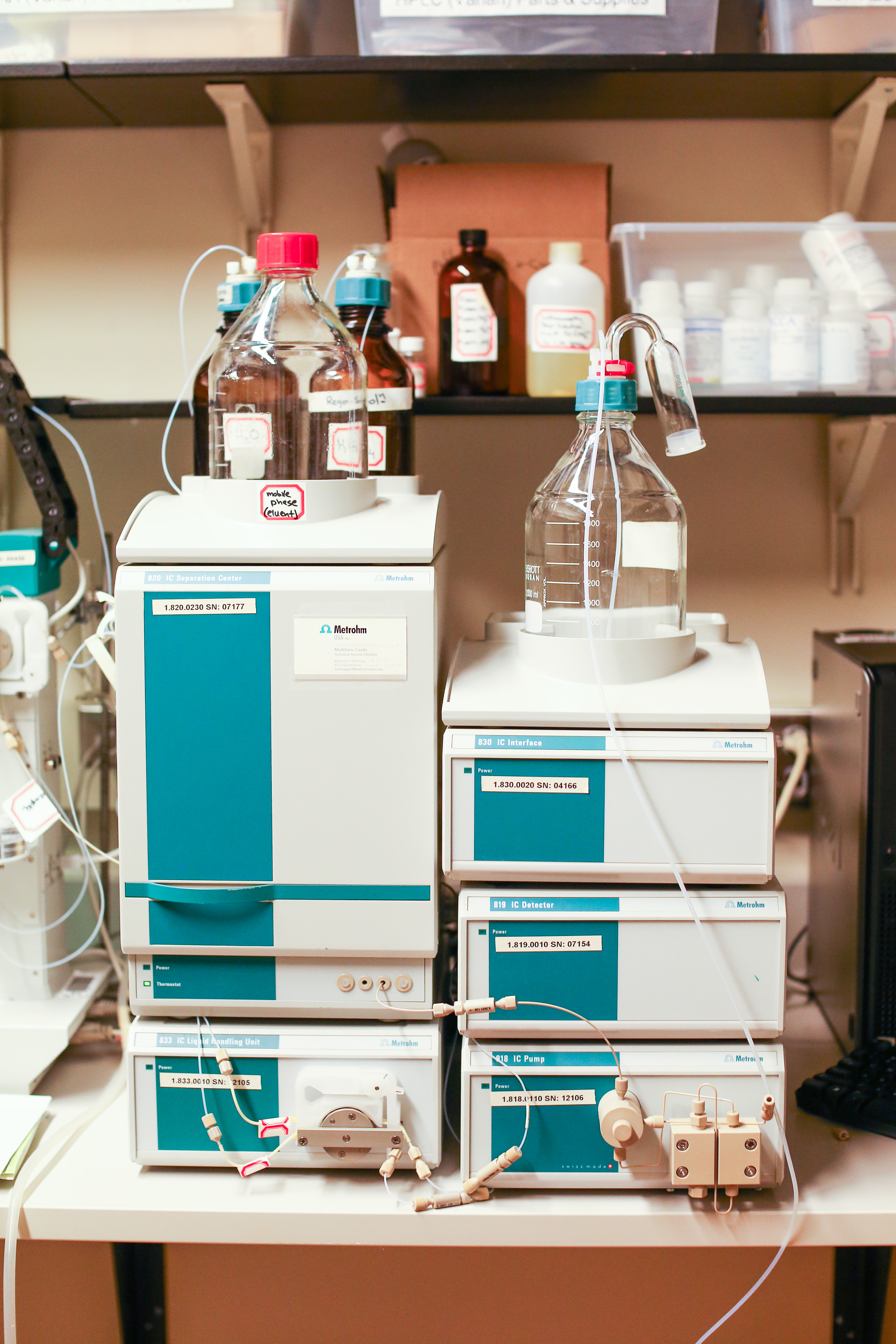 “Everybody has been very supportive of this idea,” said Dr. Mark Jensen professor of intro to analytical chemistry. “We were taking a very mature approach with this and there are a lot of faculty and staff and students who enjoy a good craft beer … it’s on the quality and not quantity and being smart about it.”

Last year, Sebastian Gardner graduated from Concordia as a pre-med. Since then, he got a job at Sanford and a job at Drekker brewery and taphouse. Gardner was a student of Jensen’s class and after taking on responsibilities at Drekker, he wanted to bring it back to Concordia.

Gardner’s senior seminar chemistry project was about beer and part of this project included a tour of Drekker. On the tour, Gardner met the owner — another Concordia alumnus — who gave Gardner a position at Drekker after he graduated.

His job was to create a lab space for the brewery and to figure out how to make the scientific side of brewing to work. Yet, because Drekker just opened its doors a year and a half ago, Gardner had limited access to the lab equipment he needed to have a successful lab space in the brewery. The equipment is expensive and a new brewery has a limited budget, according to Jensen and Gardner.

“It’s fun, I get to actually do some science,” Gardner said. “I found a job that is interesting and challenging in some ways and I get to used both of my degrees, [chemistry and biology].”

Part of Gardner’s responsibilities is to make measurements of the ingredients in Drekker’s products, including yeast management. With Concordia’s help Gardner was able to get the equipment he needed.

“Yeast is very much alive and you need to make sure everything is working the way you need it to,” Gardner said. “I am checking on the health of the yeast and pitching accurate amounts of it, running other lab tests and looking at the efficiency of the beer.”

In order to fulfill these responsibilities Gardner needed the appropriate equipment and a team to help make the measurements.

Gardner wanted to “incorporate Concordia because students have great access to awesome equipment. They have things we need and we have things they need as well.”

Gardner contacted Jensen with the original intent to create a co-op opportunity for a student to use the lab resources at Concordia in order to conduct research for the brewery. Jensen liked Gardner’s idea but wanted to start small by incorporating this project into his chemistry class.

Gardner said breweries pairing with universities for brewing research isn’t a unique application because other universities have done this before, but this kind of partnership is working well for Drekker. Drekker now has 16 students examining the beer and working outside of their normal classroom lab.

“We wanted the project to be meaningful and to engage the students,” Gardner said.

Jensen was happy to pair up with Drekker.

“I didn’t invent this idea, but I have been in conferences before where it seemed like it would be a natural extension for what we were doing and to have [Gardner] get that position makes it easy to get connection,” Jensen said.

When Erika Swenson and Nicole Harthun, students of Jensen, heard about the lab, they were excited to have their research mean something.

“We were both really excited,” Swenson said. “For me I’m not legal so I don’t have that aspect of it but I am very curious about the culture of craft beers and I think being able to incorporate craft beers in analytical lab is exciting.”

Harthun was also looking forward to applying her lab experience outside of the classroom.

“Applying it to actual life — it’s not just making chemicals it is going to do something and being a part of it that way,” Harthun said.

According to Jensen, his students determined various chemical components in four different beers from Drekker. The students were separated into eight groups where they focused on different chemical aspects of the beer.

Two groups determined the bitterness units of the beer, and various groups looked for different chemical content within the beer.

“Ultimately they have to determine what effect that the components would have on the product itself and the students are reading methods about doing this and what it means,” Jensen said. “If chloride levels are high does it have an effect on taste?”

Swenson and Harthun worked together in the lab and looked at different anions, or negatively charged ions in the Drekker beer, according to Swenson. They used a program called Ion Chromatography.

“We have fluorine, chlorine, nitrate, phosphate and sulfate and there are a bunch of other ones we haven’t identified yet,” Swensen said.

Swensen said this was a great experience for the class, because chemistry majors who are purely interested in the chemistry field will oftentimes have a beginning job in analytical chemistry involving lab management in a bar.

“It gives them a real world application of what they are learning which will transfer directly what they will be doing in the workforce,” Jensen said.

Swensen said this lab took a lot of patience, which is something she has very little of. The lab was strict and organized, so it challenged Swensen to put in the time and effort that it needs.

Harthun said one of her biggest challenges was working with the machines.

“It won’t always read as well as you want it to but you will have that with anything,” Harthun said. “It’s a matter of knowing how to read your results and how to account for errors.”

At Drekker, Gardner said the staff are very disciplined.

“They keep really good records and have great data-keeping — that way when they brew beer it’s the same every batch,” Gardner said. “Their approach is very scientific. It’s the replicability that makes them stand.”

Jensen hopes that his students’ research this semester will produce some useful data to help Drekker improve their brewing process. If the data proves to be useful, then next semester, Jensen hopes to try new things with Drekker to further the research.

“It’s a fun real-world application of what we learn in class and the students take it much more seriously when someone actually cares about what they are doing,” Jensen said.

Along with the research, some students also received a tour of Drekker. Harthun was one of those students. On the tour, the students tried four different beers different from the ones they are testing. They also learned the whole brewing process, starting with the grains.

“First we started with the grains and they let us try the actual grains they use … [we learned] how they create the different flavors from grains and how they caramelize some of them,” Harthun said. “They brought us through each process.”

This tour not only helped students understand who their research would help, but also, how.

“They explained [the research] will help them understand what components make up each flavor and if one flavor has certain anions or different hops it will drastically change the flavor and each aspect,” Harthun said.

According to Gardner, this research should help him see if different anions are good to the yeast and see if the yeast will respond better and produce better beer. Drekker is also looking to improve its flavor by looking for “off flavors” and finding a way to eliminate the unnecessary flavors. In order to accomplish these improvements, Gardner wants to expand beyond the analytical chemistry class in the future.

“We are hoping to gateway into a fully-functioning co-op where we have couple of students work with us from biology and chemistry,” Gardner said.

Once Drekker and Gardner have a better understanding of what they are working with, Gardner hopes to work with the career center to make an accessible independent study supported by the college. Gardner hopes for a co-op that provides students with class credit for working with Drekker.

“[Students] have only tested four of our beers and we have an upwards of 15, so it would be cool to test all of them,” Gardner said.

Before Gardner can start the independent studies, he also wants to confirm the college’s approval of the research.

“We are so early into it and we want to know what is OK and kosher,” Gardner said. “I didn’t know Concordia’s stance on working for a business that makes alcohol and Concordia has always had no tolerance for alcohol, but it’s not like students are drinking it, they are working with it.”

Gardner will have to wait to incorporate the biology department. The renovations of the Concordia science buildings have made it hard for biology students to access the equipment to do the research Drekker needs.

“Ideally, [in the future] both the business and the school will be flourishing and five years from now there will be a co-op and they can have fun,” Gardner said.

Having the Concordia biology department work with Drekker would be beneficial, Gardner said. Breweries often test for contaminants, which are various forms of bacteria that can be found on us, in drinks and on our food, in the beer and yeast.

“There are different processes we do to eliminate as much of that as possible so the beer continues to ferment how we want,” Gardner said.

The biology department could use bacterial plating to look at what is going on in the beer and see if things are growing that are not supposed to be there. Then, through testing, the biology department would be able to tell what the contaminants are and determine how to eliminate them, Gardner said.

“Yeast is microbiology,” Gardner said. “It is a great thing to study for biologists because so many things are easy to study about them. Brewing yeasts is fun because there is a lot of avenues to be creative. You can look for wild strings of yeast that are causing different flavors.”

Gardner and Drekker are grateful for Concordia’s help. Gardner appreciates the professors and is thankful that they don’t forget their students after they leave, but can continue to be a resource.

“The fact that we have a lab functioning at Drekker would not have been possible without Concordia and using professors as resources is helpful,” Gardner said.

While researching in Intro to Analytical Chemistry, Swensen and Harthun have found a new respect for analytical chemistry and for the brewing process.

“It has given me a respect for this work,” Swensen said. “I am not going into chemistry so I don’t have a personal direct line for how it affects my life, [but] it creates a curiosity for what makes things up and what things are made of.”

Thursday, November 19 was the last day of labs for Jensen’s class, according to Harthun. After the research is completed, students will be in charge of presenting what they found to Drekker. Harthun was excited to see how the beer comes together.

“Just how the different components can come together so nicely,” Harthun said. “We each took a different portion of it. … It will be interesting to see other people’s results and how that coincides with our own.”