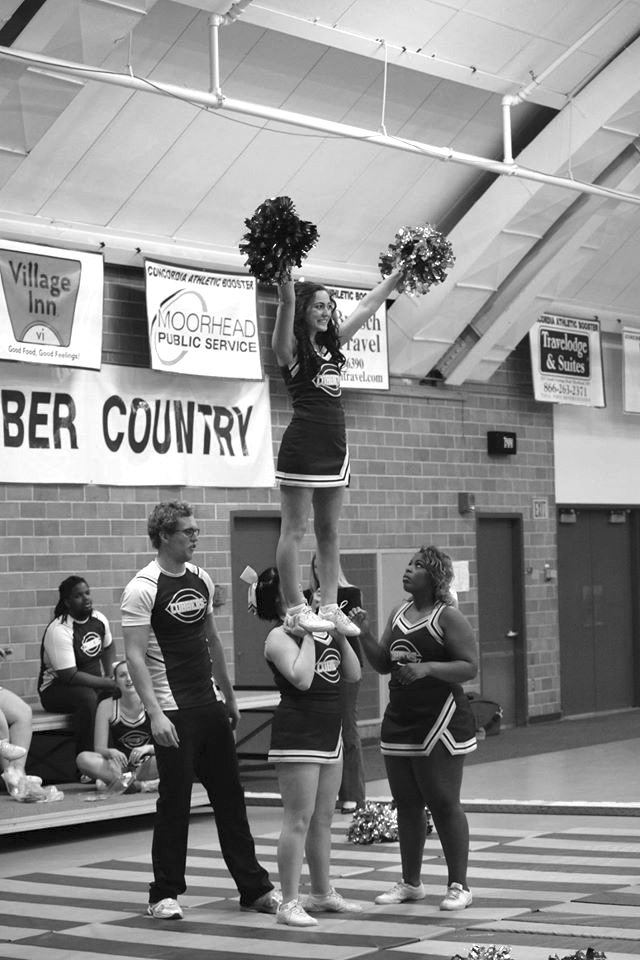 Some may have forgotten about them because technically they aren’t an NCAA affiliated sport. In fact, according to head coach Jenna Sorensen, they are just a student-led organization overseen by the Athletic Department.

They don’t have a roster posted on the athletic webpage and they don’t compete in competitions like a lot of cheer squads do, but they make an appearance at every foot- ball game and as many basketball games as possible to cheer the Cobbers on to a vic- tory.

The squad is made up of a variety of peo- ple with varied experience.

Sophomore co-captain Abigail Monroe had not even touched pompoms before she came to Concordia.

“I actually played hockey in high school,” Monroe said. “My OL was the cheer captain my freshman year so I was like ‘Oh this sounds like fun. I’ll try it out.’”

“I cheered a little bit in high school,” Frazier said. “When I was going off to school my friends and I were joking about it. I was like ‘yeah I’m going to join the cheer squad out there’ and he was just like ‘yeah do it, why not, it gives you something to do.’”

Though to bystanders it may not look that hard — just waving pompoms in the air and dancing around the sideline — Monroe said that is a very false accusation.

“It’s not as easy as it looks. You need a lot of strength and flexibility,” Monroe said. “It is difficult. I mean you are lifting people in the air with a mixture of dance, gymnastics and cheering.”

According to both Monroe and Frazier, practices range from two to three days a week, normally running two hours long. Practice consists of a light warm up around the track, stretching and getting right into stunting.

Like every other sport, when the members aren’t following coach’s rules or show up late, there are punishments to be paid.

“We have to start at a certain time otherwise we run, which is not fun,” Monroe said. “Our coach makes us run for every person that’s late and every minute they are late.”

For Frazier, conditioning never hurt anyone.

“We will have a little bit of conditioning. That comes with everything,” Frazier said. “You gotta be in shape to do it.”

Anyone can do it, in fact currently the squad is made up of a generally young group with little to no cheer experience. For Sorensen there are pros and cons with a young group.

“One challenge is spending more time teaching the fundamentals and techniques,” Sorensen said. “But on the other hand, you don’t have old or bad habits that need to be corrected either. It makes for a group that is very open and receptive to feedback.”

Monroe believes not many people have tried out in the past because they may not realize there is no experience necessary to be a part of cheer squad, so last year when creating the tryout flyer, at the bottom she listed “no experience required to join.” The added touch to the flyers seemed to work. According to Monroe, this year at the Cobber Expo there were about 50-plus girls interested in trying out.

The cheer squad is holding tryouts for next year’s season March 7 through 10. According to squad members and Sorensen, it’s worth the try.

“It is so much fun,” Sorensen said. “We have a great group of people and we genuinely have a blast at practice. I always walk out of practice in a better mood than when I got there.”

The same can be said for Frazier.