Out of the Darkness Walk unites campus and community

By: Maci Hamre
In: Events, Variety
With: 0 Comments

When Becky Weiler lost her sister by suicide, her family, friends and herself decided to come together a year later and organize a walk that could potentially help others who have gone through something similar.

This national event falls under the American Foundation for Suicide Prevention which is a voluntary health organization based in New York. There are local chapters in all 50 states that organize fundraisers to bring together individuals who have lost someone to suicide, are struggling with their own mental health or their family and friends and others who are interested in preventing suicide.

Their mission statement is to “save lives and bring hope to those affected by suicide.”

There are three types of walks that AFSP organizes. The community walks, the campus walks, and the overnight walks.

The community walk is AFSP’s main fundraiser and all the net proceeds go towards funding research for suicide prevention, creating and distributing education programs, advocating for public policy and supporting survivors of suicide loss.

The campus walks occur each spring at colleges and high schools across the country to engage young adults in AFSP’s mission.

The overnight walk is a challenging endurance walk from dusk to dawn that rotates cities each year.

According to the AFSP website, suicide is the 8th leading cause of death in Minnesota and on average, one person dies by suicide every 11 hours.

This year was the 15th annual Out of the Darkness Walk in Fargo, ND.

There were a total of 1,679 registered participants at the walk last Sunday at the Scheels Arena, which is where it was held this year. Registration was free and open to the public.

“It’s very purposeful because we know that a lot of people are not able to give anything but they still need to be there to grieve and to be supported and be a part of the community so we don’t want to turn anyone away or families away,” said Weiler.

The fundraiser had a variety of information booths about nonprofit organizations and resources for the participants. There was a table with #BeTheVoice merchandise for purchase and a Wall of Hope and Healing where the participants could bring pictures of loved ones or write names or messages for loved ones who are struggling or whose lives have been lost. There was also an option to wear beaded necklaces called Honor Beads. There were nine different colors symbolizing your connection to the fundraiser. 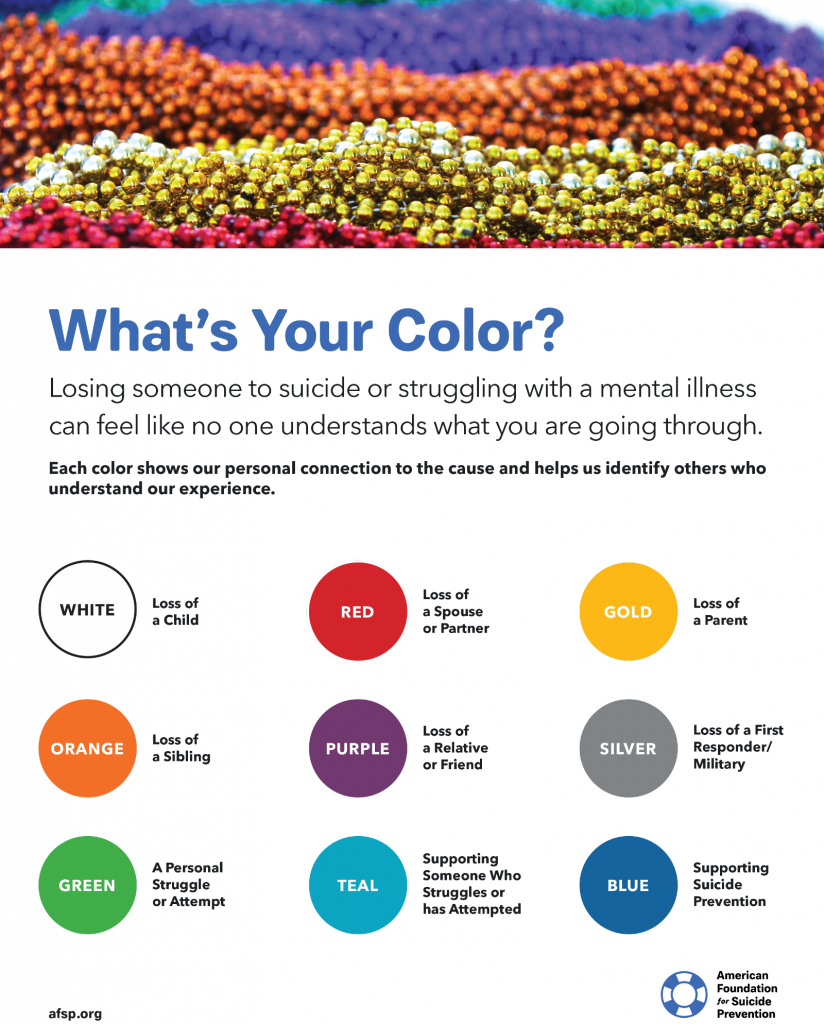 According to the AFSP, “The Out of the Darkness Community Walk is a journey of remembrance, hope, support, and a walk that unites a campus and community – a time to acknowledge the ways in which suicide and mental illness have affected our lives and our loved ones.”

Tyrell Setness, a member of the Concordia basketball team, volunteered with the team.

“Two years ago, a fellow Cobber and friend to many, died by suicide; and as that hurt was felt through the Cobber community there was an outcry to become more actively involved in the fight against suicide,” said Setness.

Setness volunteered in support of those who have been more directly affected by suicide. He found it very humbling to be able to be there and provide any help needed, or just being able to put a smile on someone’s face who has struggled with the loss of a loved one.

“I think the biggest take away from the walk was understanding that what we’re doing, even something as seemingly insignificant as handing out waters and encouraging the walkers, does help,” said Setness.

Senior and president of Narrative 4 Concordia, Sabina Beck, also participated in the walk.  Active Minds reached out to Narrative 4 about walking alongside the community to show support towards suicide prevention.

She then made a Narrative 4 Concordia team, which is possible through the AFSP website, and invited any interested Cobbers.

“It was wonderful to see so many people from the community gather together at the event,” said Beck.

Quoting one of the event speakers, Beck said, “by telling your own story, you can change someone else’s.”

“I think that sentiment is one that is crucial to keep in mind as we work to move responsibly through the world. Our words, actions, and stories carry more weight than we will likely ever know. The smallest acts of kindness and hatred can change people’s lives, and we should be thinking about how sharing our own experiences and perspectives can impact the people around us,” says Beck.

In 2017, on average, 129 Americans died by suicide each day in the United States and 1.4 million Americans attempted suicide, according to the Centers for Disease Control and Prevention.

According to the AFSP website, “Each year, suicide claims more lives than war, murder, and natural disasters combined. Yet suicide prevention doesn’t receive anywhere near the funding as other leading causes of death. It’s up to Walkers like us to make a difference. Together we can change the conversation about mental health and put a stop to this tragic loss of life.”

Through proper mental health support and treatment, suicidal thoughts and behaviors can be reduced. If you or someone you know has been affected by suicide, you can find support at https://afsp.org/find-support/.