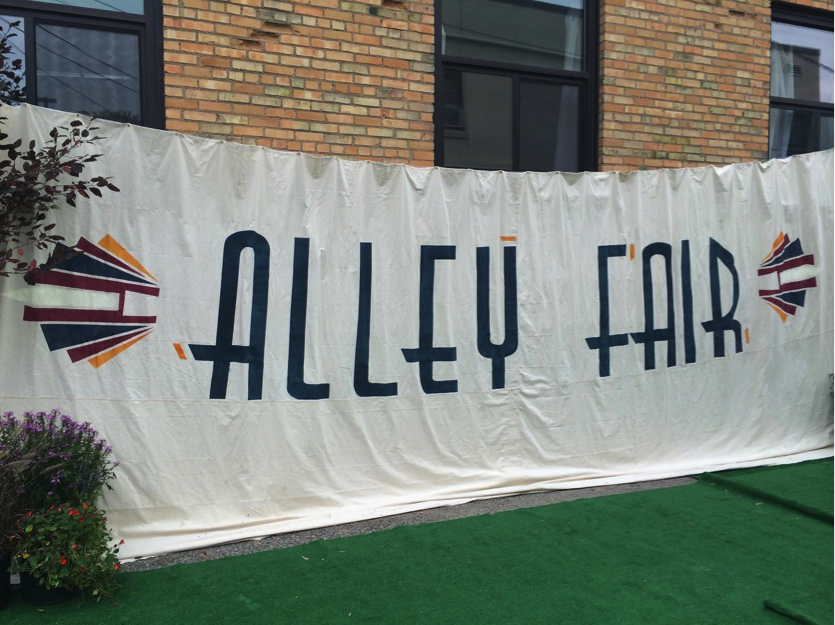 An alley is a special place. It’s where angsty teens show off their mad parkour skills; where bar patrons go for a smoke; where Scamp finds his true calling in Lady and the Tramp 2. It is a land of dumpsters, fire escapes, and Spiderman. As it turns out, an alley is also a great place for a fair. The 2014 Fargo Alley Fair took place last Saturday, September 20th, in the alleyway south of Main Avenue, behind Red Raven Espresso Parlor. From 11am to 7pm, this alley was transformed into a magnificent fair, offering munchies, entertainment, and markets galore. At 7, the fair became an outdoor concert featuring local musicians and a 21+ beer garden.

By noon, the alley was already hopping with the hippest young cats of Fargo-Moorhead. Visitors entering from 9th street could even stop to visit (and cuddle with) some real cats at Cat’s Cradle, or visit their booth at the fair. An enormous sign graced the brick wall at the alley entrance, right across from a live glassblowing demonstration by Jon Offutt. Possibilities to tempt the palate included fresh organic produce and street vendors offering anything from vegan tostadas to dark chocolate lavender push pops. Fairgoers could play with huge jenga puzzles, stop to see a world-class yoyo performance, or peruse myriad artsy items for sale by local craftspersons.

My visit to the alley fair was cut short by a brief rainstorm, but I had a chance to sample many of the culinary delights, pick up a few glassblowing tips, and grab a free “share the road” spoke card from the FM Community Bicycle Workshop table. My only complaint was the lofty prices of items sold at the maker’s market. It would be nice to see some low-cost, upcycled, flea market-esque products for sale alongside the costly jewelry and art prints. 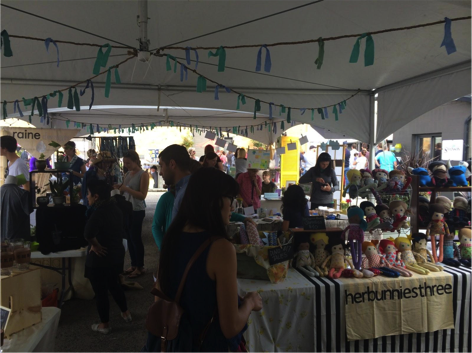 The alley fair was not only a day of hedonistic pursuits–it was a chance to discover the artistic and cultural potential of the urban landscape. For those interested, an urban design panel was offered in Red Raven’s conference room at 1pm. Artists could be seen over the course of the afternoon painting murals on dumpsters and spray painting artwork on brick walls. The creative and attractive decorations adorning the alleyway not only provided eye candy, they showed an innovative usage of the alleyway space. The creators of the Alley Fair showed us that even our most uninviting industrial urban areas have potential for beauty and for communal enjoyment. Alleyways don’t have to be delegated to derelict criminals. They aren’t just for the dumpsters–they are for everyone, if we want to follow the innovative initiative set forth by Fargo’s Alley Fair.

2014-09-25
Previous Post: Lockdown crisis: Do you know what to do?
Next Post: Soccer players find their identity