It’s a trap: How one man illegally sold half a million hockey pucks

Research has shown that Americans want to buy products that are made in the United States. But they aren’t willing to pay more for them, a Reuters/Ipsos poll indicates.

One sporting goods retailer in New York found his own unique way around this tricky conundrum.

In a Federal Trade Commision filing dated Sept. 12, the FTC alleges that George Statler III used his companies to market hockey pucks under the Patriot Puck brand as “The only American Made Hockey Puck!” when in fact most — if not all — of his pucks were actually imported from China. 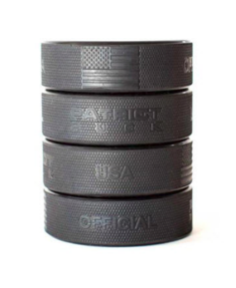 I bought 50 pucks from Patriot Puck for $29.99 in December of 2017 and was getting set to buy some more earlier this week when I came across this FTC report. Looks like I’m going to have to go elsewhere to make that purchase.

On average, the price of a single hockey puck varies from around $2 if purchased individually to as little as $1.20 if purchased in bulk. Needless to say, Patriot Puck’s $0.60 per puck should have been obviously too good to be true.

But who can resist a good deal?

The FTC says that Statler imported more than 400,000 hockey pucks since 2016 for the express purpose of selling them. Statler’s other companies, Sandpiper and PiperGearUSA, were charged with deceptively marketing more than 80% of their products. Additionally, the companies were allegedly counterfeiting tags that made it seem like products were made in the USA when they were all or mostly made of imported items.

If you’re going to lie to customers, you might as well go all out. Patriot Puck went so far as to emblazon the American flag on the outside of its products with a “Made in the USA” mark. The company marketed its products with lines like “Proudly Made in America” and “100% American Made!”

To comply with the FTC complaint, Statler will need to meet the following criteria before making any claims that products are Made in America.

Patriot Puck is still actively selling products as of November, but it is no longer in the puck business. With that said, the company’s eBay storefront still proudly displays one of its old marketing go-tos.