Women on the Front Lines

By: Emma Connell
In: Blogs, Politics
With: 0 Comments

Women have not been allowed to fight in front-line units since 1994, but have been attached to all-male combat troops as photographers, medics, military police officers, etc. While they were fired upon at times, they would not intentionally head into combat. The Pentagon’s recent decision to allow women into front-line combat units adds to the already happening shift of the military towards inclusion and tolerance. This follows the recent repeal of Don’t Ask, Don’t Tell policy and ensures that all people, no matter their gender or sexuality, are able to serve their country in the military.

This new position by the Pentagon is remarkable for female military members. While it took until 2013, military officials  have officially recognized that women can do just as well in combat as men. The Pentagon is currently working on creating gender-neutral physical standards for all combat troops, getting rid of the past precedent of having lower standards for females. At present, women have more lenient standards, which furthers the perception that women cannot meet the same physical requirements as men. By making gender-neutral standards, the military will ensure that all of their combat troops are fully able to fight, regardless of their sex.

Female veterans seeking medical benefits will in all likelihood have an easier application process to redeem benefits. When these veterans are able to say that they actively fought in combat, the application for medical benefits and other medical coverage will not require as much proof of injury as a military photographer or translator, for example. This will shorten the amount of time that female veterans will have to wait to receive compensation for the injuries and mental health problems that were inflicted upon them in battle.

While this is another significant step toward equality from America’s military, it’s frankly embarrassing that it took until 2013 for this change to be enacted. A Gallup poll published Jan. 24 shows that there’s an overwhelming majority of Americans who support the allowance of women serving in combat—this isn’t a controversial issue, yet it’s taken this long for women to be given the option of serving in combat. The ability to fight should be judged by competency alone, which most Americans readily acknowledge. 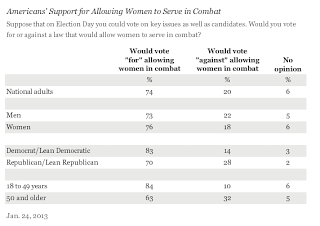 By allowing women to fight in combat troops, the military is welcoming all skilled soldiers to fight for the country—a change that should have been enacted years ago. The Pentagon has gotten much more progressive in the last couple years, but it has a long way to go. The military has been stuck in the past, when it needs to look to the future.