The United States is still a country that protects rapists and sexual abusers.

America has made great strides in the last 50 years toward true gender equality, but we’re still seeing blatant sexism in the news and on college campuses, especially in the last couple months.

Recent coverage of the Steubenville, Ohio rape case revolving around two high school football stars and the 16 year old they assaulted at a party has brought how the country views sexual assault to the front of a lot of people’s minds.

CNN’s coverage of the trial was especially troubling. Their reporting revolved around the two football players and what great young men they were:

“These two young men who had such promising futures—star football players, very good students—literally watched as they believed their life fell apart,” Poppy Harlow said as she reported the case.

“What’s the lasting effect though on two young men being found guilty in juvenile court of rape, essentially?” Candy Crowley asked a legal analyst on her show.

These two men, at this point in time, have been sentenced to at least one year in juvenile prison.

CNN is not the only news outlet that handled this case poorly—Fox News reported the name of the 16 year old victim, and ABC News, NBC News, and other news outlets have spent more time focusing on the “promising futures” of the young men and how the victim was drunk than they’ve spent covering the actual trial or the facts of the case. 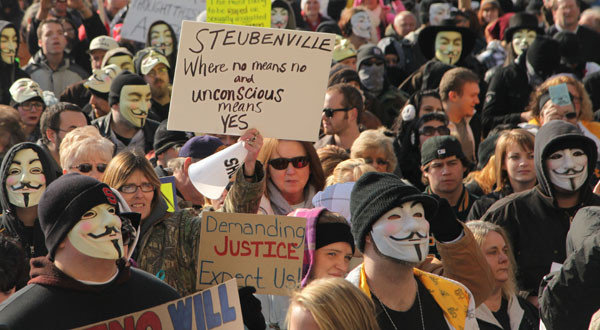 News media isn’t alone in defending the rapists. There’s evidence in this trial that the head coach of the football team was aware of the rape allegation and did nothing to follow up, even though coaches in Ohio are required by law to report suspected child abuse.

Mishandling of sexual abuse cases by people in administrative positions isn’t particular to Steubenville, though. Students and faculty at Occidental College have taken a case to the federal government over the mishandling of sexual assault cases on campus. They have asked for help from a group of women at UNC Chapel Hill who prompted a federal investigation with similar complaints against the University. Those women at UNC had learned from a group of students at Amherst College how to pursue this, and these students at Amherst had learned from some women at Yale.

The United States needs to focus on sexual violence education in schools. While many schools have programs teaching female students how to protect themselves from situations that could lead to sexual assault, including rape, most education is targeted at educating potential victims about how to keep themselves away from potentially dangerous situations. Very little is being done to teach all students what constitutes sexual assault and rape and that committing acts like these is wrong and punishable. This education needs to encompass all students and be repeated throughout their high school curriculum. Education needs to reach outside of the classroom, though. Information needs to be spread throughout the population, through government intervention, training sessions within the workplace covering sexual assault in addition to lectures on sexual harassment, etc. The Steubenville case has shown that there’s a real flaw in the way our country approaches rape.  The “blame the victim” attitude encompasses all of the population, and degrades the character of the nation as a whole.