This is how junior Haleigh White describes her newfound passion: Roller derby.

According to White, roller derby is a contact sport played on roller skates on an oblong track like one used in track and field competitions. A bout consists of two teams, each made up of four blockers and a jammer, who scores the points. The teams skate around the track as the jammer tries to get through the “pack,” earning a point for her team each time she passes a member of the opposite team.

It was a star-crossed night that evening in 2009 when White first saw a commercial for “Whip It,” the film that put roller derby on the map. That was also the inaugural year of the Fargo-Moorhead Derby Girls. But it wasn’t until fall of her sophomore year that White saw her first bout.

However, she found out she had to be 21 in order to join.

“That was the longest two years of my life,” she said. “When I turned 21 in September, I checked their website to see if they were recruiting.”

“I was pretty bummed out,” she said. “I felt like I really needed something else rather than being at school all the time.”

Then a few days later, White came across a flyer that said “Roller Derby Recruitment Night.” It was that night, and it was in an hour.

“I freaked out,” she said. “It was at Skateland, and I was so nervous I was shaking. I hadn’t used skates since third grade.”

But White made it through the auditions and is now a part of the team The Fighting Suzies. Although it was a bit intimidating at first, she says her team is made up of “fantastic women,” and that they became an “instant family.”

To increase the close-knit feel of the derby team,

each member of the team must come up with a “derby name.” White’s is “MelanBrawly Baby.” It took a lot of thought to come up with the name that now represents, as Baby said, her “alter ego.”

“I asked a lot of people for help. My little brother suggested Death Panda,” she added with a laugh.

Baby said that she can’t even remember some of the peoples’ actual names, since they only go by their derby names.

“That’s the cool thing about roller derby. You get all this gear on and skirts and fishnets and you get this different persona,” Baby said. “You can be anyone you want.”

Despite the fact that Baby is the youngest on her team (the average age of the FM Derby Girls is 29, with some of them over 40), there is no getting past the fact that roller derby is a contact sport.

Sarah Vlasik, a junior environmental studies major, describes roller derby as “an action packed game which involves the old school roller skates that reminds me of images of cute couples skating in a roller rink, but then brings this insane twist of thrashing and crushing your opponents, which completely erases the cute couples and replaces them with ferocious beasts.”

Vlasik compared the roller derby fan base to those of hockey and rugby, and believes the “brutality of the game” is their common link.

Baby said that their league takes safety very seriously, and that everyone is required to wear protective gear such as kneepads, wrist guards, and mouth guards. Referees check all the gear before each bout, and players can get penalized for not having the proper safety equipment. They even teach the girls how to fall properly, she said.

But although the bouts can get a bit vicious, Baby argues that there is a lot of respect between teams.

“It’s not a big cutthroat competition. Whoever wins, we’re incredibly happy for each other,” she said.

At the bout on Feb. 11, the Fighting Suzies won, beating out the Monkey Wenches. However, despite extensive word-of-mouth advertising, not as many people showed up as the league was hoping.

The FM Derby Girls have been struggling to make rent recently, which results in their lack of funds for advertising. To try and raise more money, they are hosting a Skate-a-thon on Saturday, Feb. 25 at the warehouse where they practice, which is located above Tubs of Fun in Fargo. 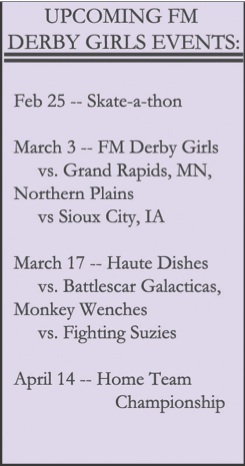 Each skater will be sponsored based on how many miles they will skate that day. The league as a whole has set a goal of 500 miles. Baby said by sponsoring the FM Derby Girls, however, you aren’t just helping out the skaters.

Each bout is dedicated to a specific charity, with last weekend’s bout going to help breast cancer awareness. Other charities that have been chosen in the past include the Rape and Abuse Crisis Center and various animal shelters.

Since roller derby is something people of all ages can do, Baby can definitely see herself doing it for years.

“I don’t know where I’ll end up after college,” she said, “but it will probably make a difference if there’s a roller derby team or not.”